Home Entertainment Celebrities Glad that World Media is Finally Waking up to see what is...
Advertisement 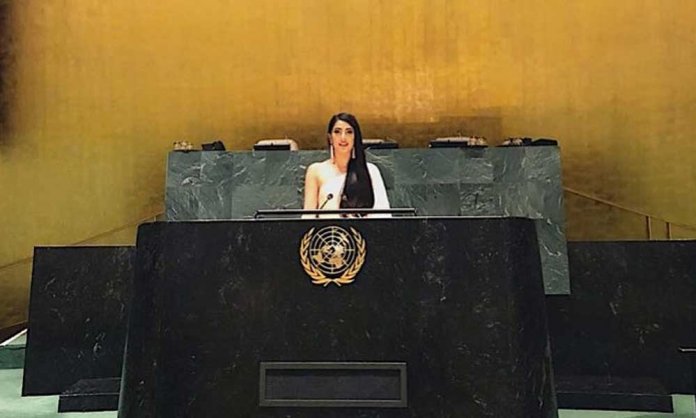 She further writes that she is happy that the world is finally seeing what is really happening in Kashmir.

She further adds that this is just the tip of the iceberg.

Thank you @BBCWorld for highlighting what we have been saying for so long. Glad that world media is finally waking up to see what is really happening in Kashmir. This is only the tip of the iceberg. #SaveKashmir.

Thank you @BBCWorld for highlighting what we have been saying for so long..🙏
Glad that world media is finally waking up to see what is really happening in Kashmir. This is only the tip of the iceberg.#SaveKashmir https://t.co/knwyRB1VSD

The national anthem was played and sirens blazed all across Pakistan.

16th August: Mehwish Hayat is both loved and criticized by Pakistani and international fans for the stellar display of her acting and dancing skills on the screen.

She stole the spotlight for both good and bad reasons after receiving the Tamgha-e-Imtiaz in March this year.

And she has stolen the spotlight yet again, after her address at a Peace event in Oslo(Norway) and recognized with an award for Pride of Performance.

See her speech below and you’ll know exactly what we’re talking about:

I was honoured to address distinguished guests including The Right Honourable Prime Minister of Norway, Madam Erna Solberg at a Peace event in Oslo where I was recognised with an award for Pride of Performance. I was able use the prestigious forum to talk about the the role of cinema in promoting peace. Unfortunately the way we are being represented is creating divides… Bollywood could have used cinema to promote mutual understanding instead of vilifying us as they do. They need to decide which is more important – nationalistic fervour or a peaceful future. #MehwishHayat #Oslo #HomeofNobelPeacePrize #PeaceDialogue

In her speech Mehwish Hayat emphasized on how film industries have mostly used their power and platform to present a negative image of Pakistan and Pakistanis, when they could actually have done the opposite and broken the stereotypes the world already holds about our country.

This takes us to another celebrity who has been trending all over social media, but for the wrong reasons:

Priyanka Chopra, popular Bollywood actress and a UNICEF Goodwill Ambassador, responded to a Pakistani-American woman’s audacious question at the BeautyCon summit in Los Angeles and has been under the fire ever since.

The question was with regards to the tweet Chopra had posted in February in support of an announcement from India about launching airstrikes in Pakistani territory.

She was asked why she had been advocating war between two countries especially while she is an extremely influential persona and also a Goodwill Ambassador for UN.

Chopra’s response was criticized all over the world for being condescending, and soon a comparison between Mehwish Hayat and Priyanka Chopra began.

Her acting gave her a spotlight but her National Award gave her the pedestal she needed. It’s not so much about what we achieve but more about what we do with our achievements. The Tamgha-e-Imtiaz has given @MehwishHayat a very strong voice,one we need. She definitely has my vote

In a world of Priyanka Chopras be like Mehwish Hayat. https://t.co/Rnv4XIJ2e9

Here is what Chopra said:

“I hear you,” she said. “Whenever you’re done venting… Got it? Done? OK, cool. War is not something I’m really fond of, but I am patriotic.”

priyanka chopra is so disappointing 🤯 she saw that bloody bodyguards taking the mic away from the girl and yet she did nothing. Also the f with that "whenever you're done venting" and "dOnT yeLL??" no chopra shes not done yetpic.twitter.com/KXvbZC4S6j

Chopra ended her response with the following demeaning lines:

The comparison between Hayat and Chopra has gained so much traction that people have started petitions to take Chopra down as UN Goodwill Ambassador.

@UNICEF this amazing woman called out @priyankachopra rightfully so. Advocating war hardly screams ambassador of peace so we suggest if you truly take your position as a charity seriously reconsider who you hand out these roles to.

This situation has also led people’s attention back to when Mehwish Hayat received the Tamgha-e-Imtiaz and how she really does deserve the award.

I’ve always loved Mehwish Hayat but its funny that people who questioned her character just because she got a Tamgha-e-Imtiaz are now singing her praises just because what she’s saying is nationalistic and counters an Indian narrative. Billi > Piggy #MehwishHayat #PriyankaChopra