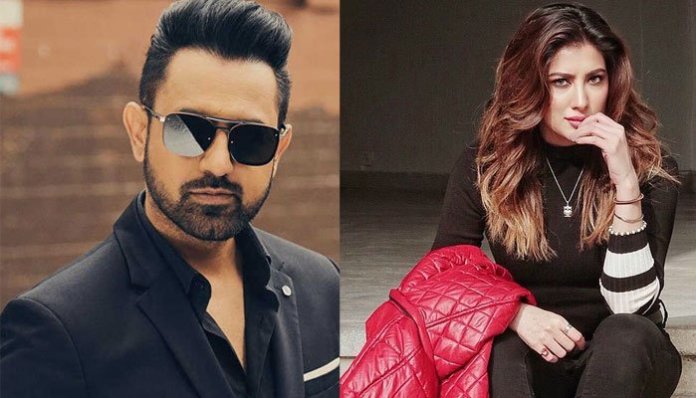 Indian actor and singer Gippy Grewal is currently visiting Pakistan. The Carry On Jatta artist is in the country to explore the Sikh holy site of Nankana Sahib and pay his respects.

His stay is being largely covered on local and social media with the actor himself updating the masses with his trip to Pakistan.

However, the actor stated that he watched the movie ’Punjab Nahi Jaungi’ and would love to work alongside starlet Mehwish Hayat if he ever had an opportunity.

”I would say to all the people that I got so much love from here and now I will bring my children and family here within a couple of months, I was welcomed here,” he said.

Grewal and his committee landed in Pakistan on Monday where they were greeted at the Wagah Border by the government officials.

The singer also said that I have traveled around the world in my life, I have never been as excited to go to Pakistan.

In response to his statement, Mehwish Hayat thanked him for his kind words, adding “Let’s get you a Pakistani flick soon.”

Welcome to Pakistan @GippyGrewal . Thank you for your words of appreciation. Glad that you are enjoying our films and hospitality. Let's get you a Pakistani flick soon ! 🇵🇰@TBajwa7 https://t.co/0D4Jxko6Do

Talking to APP, Grewal announced that this voyage was long due and he had been scheduling to visit Pakistan for a while now.

The singer uttered that he was delighted to be here and especially thanked Special Assistant to the Prime Minister on Overseas Pakistanis Zulfi Bukhari for his endeavors to make this trip feasible.

Moreover, Gippy will also be visiting Gurdwara Panja Sahib in Hasan Abdal during his trip.

His trip also includes a tour of Lahore and Islamabad and the spot of his ancestors, which they bid goodbye to in 1947.