According to ARY News, Amid coronavirus threat, the Pakistan Cricket Board (PCB) on Tuesday has postponed Pakistan Super League (PSL) season 5.

Moreover, the PCB also said that the knockout matches of PSL are scheduled to be played in Lahore today and the final to be played tomorrow, will be rescheduled.

IMPORTANT ANNOUNCEMENT#HBLPSLV postponed, to be rescheduled. More details to follow in due course.

So far, 184 cases have been reported in Pakistan and the number of cases are predicted to increase over time.

The Pakistan Cricket Board has rescheduled the remaining matches of the HBL Pakistan Super League 2020 by replacing the playoffs with semi-finals on 17 March and the final on 18 March.

The decision means the HBL Pakistan Super League 2020 will be reduced by four days and there will now be 33 matches as opposed to 34.

The final will be played on 18 March and will start at 7pm according to the new schedule. 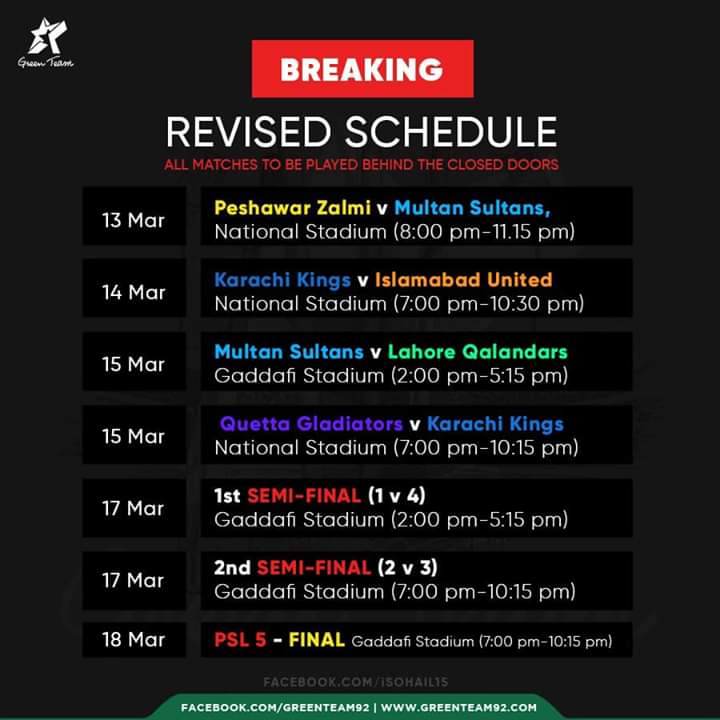 Pakistan Super League’s (PSL) fifth edition is currently taking place in Karachi and previously, officials had announced that everyone attending the matches in the city must be screened for the deadly coronavirus before entering the National Stadium Karachi.

Sindh government confirmed that the PSL matches will be held on the scheduled dates and time and no changes will take place.

Initially, the decision of screening each individual was taken as a precautionary measure by the government. Other measures included the availability of hand sanitizers within the stadium.

Sindh government had given clearance to Pakistan Cricket Board (PCB) assuring them that the situation is under control.

According to Geo News, Murtaza Wahab, Advisor to the Chief Minister on Law tweeted on Thursday, that all PSL 2020 matches in Karachi will be held without any crowd, which means, no crowd will be allowed to enter the stadium.

“#SindhGovt has decided that the remaining matches of PSL in Karachi will take place without any crowd. This decision has been made after consultation with all stakeholders including the Pakistan Cricket Board.”

#SindhGovt has decided that the remaining matches of PSL in Karachi will take place without any crowd. This decision has been made after consultation with all stakeholders including the Pakistan Cricket Board.

The PCB in a press release, in-line with the Sindh government’s decision said, “The decision will be enforced from Friday, 13 March, while for the Thursday, 12 March, fixture, the PCB and the Sindh Government have strongly advised the spectators to continue to take all necessary precautionary measures.”

“We empathize with the Karachi fans who have been outstanding with their support in the earlier matches and during the hosting of eight PSL matches last year.”

PSL Tickets to be refunded

The PCB also said that the tickets for these matches will be refunded through TCS and yayvo as per the ticketing policy.