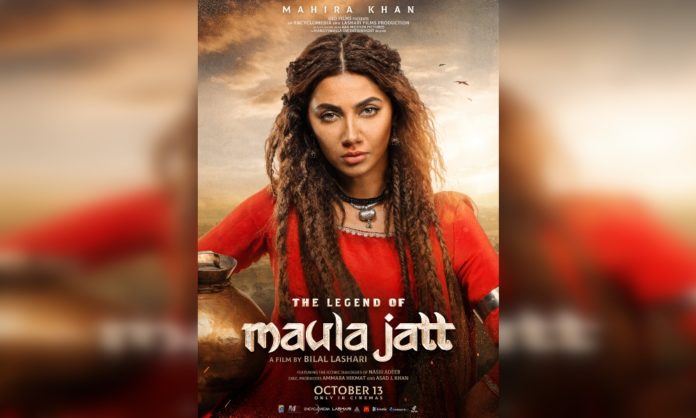 Mahira Khan’s poster presents her portrayal of the lead character ‘Mukkho’ in the film, showing off her monochromatic look and permed long locks. The styling and makeup compliment her character perfectly as she stands tall in the poster with an assertive yet mischevious look in her eyes, adding to her character. In the original ‘Maula Jatt’ the role of Mukkho was essayed by Aasia Begum and now the audience is bracing themselves to see what Mahira has to offer as Mukkho in the much-awaited TLOMJ.

The film ‘The Legend of Maula Jatt’ is a hard reboot of the 1979 film ‘Maula Jatt’, it has been directed by Bilal Lashari, who is well known in the industry for his directorial debut with ‘Waar’, and produced by Ammara Hikmat through the Encyclomedia & Lashari Films in association with AAA Motion Pictures joint venture. The screenplay is penned down by Bilal Lashari, and the dialogues by Nasir Adeeb. The film boasts one of the most expensive star-cast including Humaima Malick, Humaima Malick, Mirza Gohar Rasheed, Ali Azmat, Faris Shafi and many more.

The filmmakers have partnered with Geo Films as their presenting partner, Pakistan’s largest media group and an important contributor to Pakistani cinema’s revival. Nadeem Mandviwalla of Mandviwalla Entertainment, who is well known for his commitment towards the Pakistan film industry, will distribute the film locally. MovieGoers Entertainment will distribute the film internationally.