6th April: Local news channel, ARY News is known for making blunders on national TV. This time around, the channel reported that Portuguese professional footballer, Ronaldo was getting a trim from his son instead of his girlfriend, Argentinian model, Georgina Rodriguez cladded in a hoodie.

Apparently, Ronaldo and his girlfriend, Georgina alongside their children are currently self-isolating in Ronaldo’s native Madeira amid coronavirus. 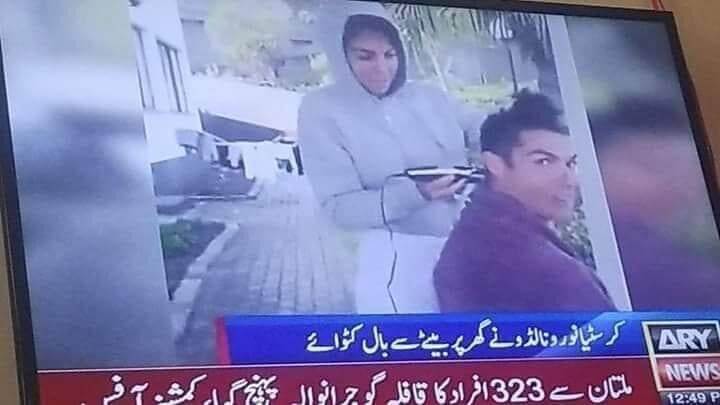 Stay home and keep stylish #stayhomestaysafe quotes the footballer on his twitter.

Just came across our Media's level of reporting. She is Ronaldo's GF not his "Beta" 😂😂😂

30th March: The novel coronavirus has got the world in turmoil, with over 700,000 confirmed cases and 34,000 deaths globally. During these tough times, the Eiffel tower in Paris is lighting up for caregivers, doctors, nurses, paramedics, police and other front liners. This began from Friday evening, a broadcast message is sent out to all those fighting in this battle against COVID-19 in order to appreciate their tremendous efforts.

The word ‘Merci’ is lighted up with golden dazzling lights on the magnificent Eiffel Tower, from 8 pm to 11 pm in the night as a tribute to all those working hard to save lives in this pandemic.

The iconic Eiffel Tower in Paris lit up with messages paying tribute to those on the frontline in the fight against the new coronavirus outbreak, Friday. France has reported more than 32,000 COVID-19 cases, and nearly 2,000 deaths.

Merci means ‘Thank You’ in French. However, ARY News thought France was asking for ‘mercy’ from God, and this was run on their channel too!

People across Pakistan noticed this hilarious mistake and took to Twitter to express their thoughts!

The definition of “merci” is “thank you” in French.

After all the tweets correcting ARY News’ mistake, someone from ARY finally noticed and rectified the error.