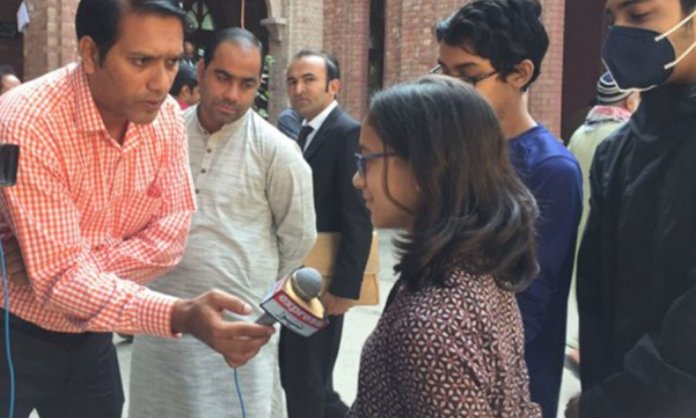 Two school-going children in Lahore have filed a petition in the Lahore High Court against the dangerous smog that has built up in the city since October.

Mishael Hyat, 17, Leila Alam, 13, and Laiba Siddiqi, 18 have filed the petition to get Chief Justice Mamoon Rashid Sheikh’s attention in regards to the deteriorating air quality in the city and its surrounding areas.

The teens have accused the government of Punjab of violating their right to life and health by underreporting the severity of Lahore’s polluted air.

The petition states that “Smog Policy and Action Plan arbitrarily underreports the severity of ambient air pollution thereby exposing the general public to unacceptable and unsafe levels of air pollution and is therefore violative of the Fundamental Right to a clean and healthy environment.”

According to USEPA Air Quality Index (AQI) the air should be on 50 (Good) whereas it is on 144 (Unhealthy for Sensitive Groups). Lahore’s air quality was 182.

Children filed a petition in the Lahore High Court asking the govt to tell the truth about the severity of air pollution in Lahore. The EPA and AG have been summoned for next Tuesday for a response. pic.twitter.com/h5UKxxe8t1

Just last week, the air quality of the city crossed 400, crossing all safe limits to set an all-time record.

Children start to get ill as soon as the winter begins, -Rafay Alam

Alam told the court that seniors and children are vulnerable to the smog outside. Not just that, it can lead to serious health issues including a rise in asthma and other related cases.

Earlier, Amnesty International had also pointed out at the Pakistan Government’s failure to protect the citizens from the increasing bad-air quality as Lahore had reached 484.

Alam shared that air-quality worsens when smog seasons ponders in (Oct-Jan), due to Pakistan’s general industrial, agricultural, and transportation practices. The government needs to do something to provide relief to citizens, he added.

The LHC has directed the Punjab government to submit its reply in the next hearing.