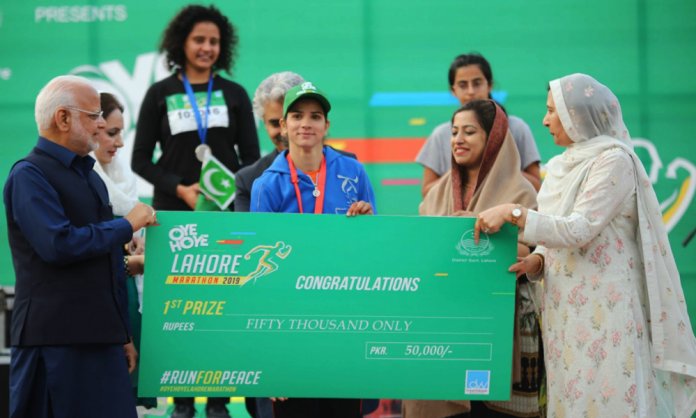 The marathon covered a 10km route (starting from Gaddafi Stadium roundabout) and was aimed at promoting a softer image of the country, through engagement of citizens in healthy activities.

With the recent on-going tensions in the region, Lahore Marathon is an initiative of the District Administration Lahore aimed at delivering a message of peace on Pakistan’s Republic Day.

The Marathon invited citizens of all ages and gender to #RunForPeace, symbolizing a communal petition of peace and harmony globally. The non-profit event will be title sponsored by the brand Oye Hoye and organized by Dreamweaver Productions.

Our efforts intend to broadcast a communal message from Pakistanis to the entire global community that Pakistan is a peace-loving nation who speaks a language of harmony and tolerance while simultaneously rejects every form of violence,-said D.C. Lahore, Saleha Saeed.

It’s an iconic decision to commence the march on Pakistan Day while simultaneously sending out a powerful message that a true Pakistani patriot is an advocate of peace. Our very own Pakistan-based brand Oye Hoye is truly proud to support the state in delivering this revolutionary narrative to bring out a positive message from Pakistan throughout the world –said Director Marketing of United Snacks, Mian Shahzad Khalid.

Participants were facilitated with hydration points and aid stations (staffed by an ambulance team) throughout the route. The road traffic was also restricted throughout the duration of the competition on all running routes with further assistance from traffic and local officers, in accordance with legislation.

While ensuring a positive image for the city and the department, the project also provided entertainment for the public. Acclaimed Bangra band Sahara UK performed live on the closing ceremony at Alhamra Arts Council.