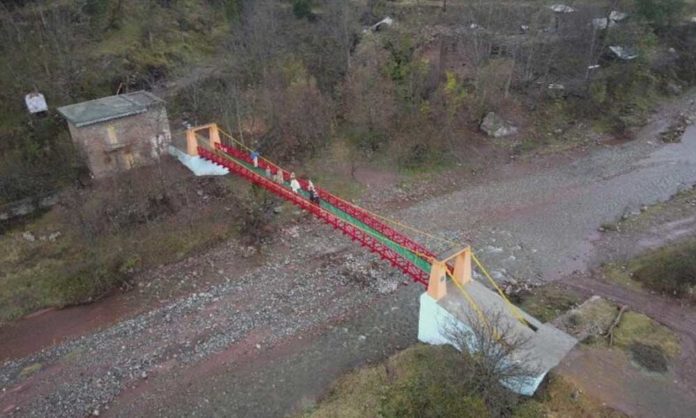 Khushhali Microfinance Bank Limited has supported major repair work of the Wacha-Wana suspension bridge in Tirah valley to recommence commuting and restore transportation infrastructure in the Khyber Tribal District. Elevating the quality of life is the focal point of Khushhali Microfinance Bank’s social initiatives, and this award-winning financial institution contributes generously towards community welfare and sustainability.

In a vastly underdeveloped region with impoverished local communities that are deprived of basic life amenities, Khushhali Microfinance Bank has taken it upon itself to create easy access in the devastated area. Despite numerous challenges, Khushhali Microfinance Bank was able to establish multiple branches in other remote areas, which are not only integrated with the mainstream financial sector of Pakistan but also leverage the technological stack to tap into the potential of the remote dwellers and provide broader financial inclusion. Through concerted efforts to improve the lives and livelihoods of the locals, Khushhali Microfinance Bank is committed to launching more and diverse progressive initiatives in the coming years to help serve these communities better and drive sustainable economic growth.

Over the past decades, nearly 30,000 residents have been impacted by geopolitical instability and militancy in Tirah Valley. Thousands of families lost their homes and livelihoods before peace and stability were restored in the valley through the Pakistan army’s concerted efforts. Witnessing the daily struggles of the locals, Khushhali Microfinance Bank decided to step in and provide utility to the people it serves by repairing the suspension bridge. By restoring the Wacha-Wana suspension bridge, this remote region’s accessibility will be reinstated so that the socioeconomic rehabilitation of its underserved community can be facilitated.

To ensure the safe arrival of the displaced residents after over 12 years, Khushhali Microfinance Bank in conjunction with the Pakistan army is systematically effectuating rehabilitation work in the Khyber Tribal District. These recovery efforts entail fixing roads and key infrastructure to reconstruct the previously conflict-torn region.

The president and CEO of Khushhali Microfinance Bank, Mr. Ghalib Nishtar said, “We are pursuing a vision to accelerate socio-economic growth in Pakistan. Restructuring this important bridge in Tirah Valley is also a part of our resourceful efforts for the well-being of the masses. Khushhali Bank is expanding its network for the financial inclusion of Pakistan’s vast, unbanked, underserved population. Customer-centric innovations and deployment of advanced technologies have enabled Khushhali Microfinance Bank to enrich its operational performance.”

This project is a part of “Khushhali for Everyone” – an exemplary ‘Corporate Social Responsibility’ program by Khushhali Microfinance Bank to invest in human development, empowerment, plantation, and environmental sustainability.