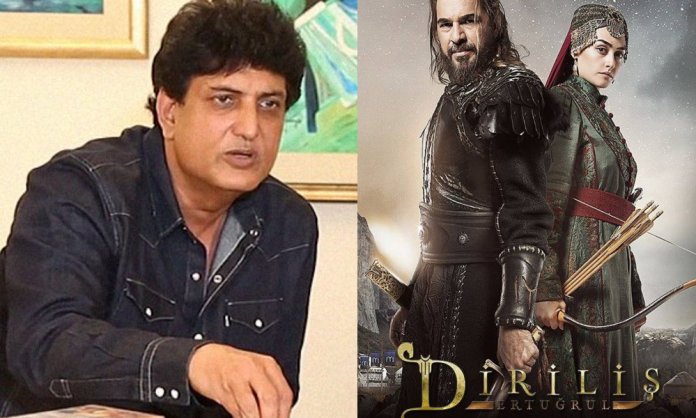 Khalil-ur-Rehman Qamar is a name that requires no introduction. He has always been in the spotlight for one reason or another. While the famous writer has been denounced for his stance on topics such as feminism, Qamar is now working on a script similar to the acclaimed Turkish period drama, Dirilis: Ertugrul, that has now become a matter of the moment.

The drama serial Dirilis: Ertugrul is so popular that PM Imran Khan has suggested the nation to watch the show and gain a good knowledge of Islamic heroes. However, sadly the Pakistani entertainment industry hasn’t been able to create a masterpiece like it.

When can we see the play?

The Meray Paas Tum Ho writer announced that he already had a word with the Punjab Nahi Jaungi actor Humayun Saeed concerning the new series, and the duo will be working on a show similar to the renowned Turkish drama.

“Of course, we are thinking of making something like this. Three days ago, I spoke to Humayun Saeed about this, and we have decided to make something,” stated Khalil-ur-Rehman.

The Kaaf Kangana director went on to add, “I have been asking him to work on something like this for the last twelve years, but the problem is we have limitations. We do not have enough facilities. Otherwise, we have brilliant actors.”

The director also mentioned that we are stuck in typical saas-bahu dramas, so we do not pay attention to topics like Ertugrul Ghazi, he went on to say.

When he was congratulated on even thinking about working on a script as grand as the Turkish epic, the writer quickly interrupted and said, “I am not just thinking about it, I am going to start penning the script from tomorrow.”

Why is Dirilis: Ertugrul talk of the town?

Ertugrul has given people something to watch outside of English-language Hollywood movies, and it’s based on the life and times of the 13th-century Muslim Oghuz Turk leader, Ertugrul, has taken Pakistan by storm.

Ertugrul was the father of Osman, the founder of the Ottoman dynasty, which ruled a large part of the world for 600 years, and the drama has helped many learn about Islamic history.

Ertuğrul by PTV has crossed 1 million subscribers on YouTube& now the government of Pakistan wants u to help them create history by reaching 6.6million subscribers before May 25th 2020 to make #ErtugrulYouTubeRecord an attempt to make i most subscribed YouTube channel in Pakistan pic.twitter.com/cg1HQQGesJ

Let’s see what we have in stores and what does director Khalil-ur-Rehman intends to show the masses. We’re undoubtedly bored of our minds watching the same misogynist Pakistani dramas, and this play might be a fresh breath of air.