Karachiites never fail to surprise, they always go an extra mile to prove their love, hate and passion in general.

Currently, fans of Danish are putting up a justice event in Karachi today at Frere Hall. The masses are glued to their TV these days because of the hit Drama serial “Mere Paas Tum Ho”.

Humayun Saeed and Ayeza Khan-led drama serial that has kept the fans wanting more with its surprisingly great plot development. 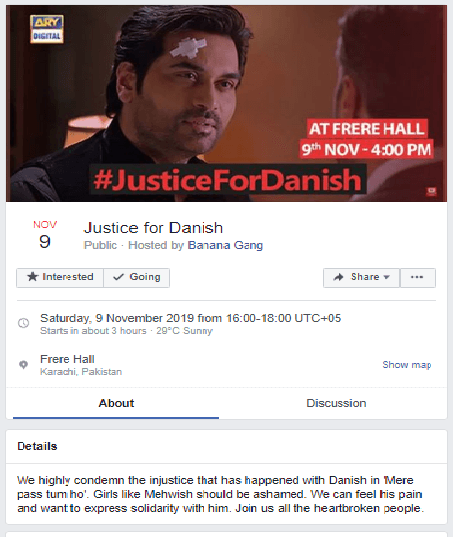 The character of Humayun Saeed (Danish) has made his place in the hearts of the audience and people are empathizing with the handsome, emotionally unstable protagonist character. So much so that the fans from Karachi decided to bring justice for Danish.

A social media group called Banana Gang is hosting the ‘justice‘event at Frere Hall in Karachi on Saturday, November 9th. Sounds Crazy right?! But all is possible for the love of Danish!

Directed by Nadeem Baig and penned by Khalil Ur Rahman Qamar – people are eagerly waiting for the upcoming episode of the drama that is going to air tonight at 8pm on ARY Digital.

Now that the actress Hira Mani is also joining the cast of ‘Mere Paas tum Ho’ we’ll just have to see how the plot further unfolds. The actress took Instagram to announce her entry in the drama, twirling in a pink saree and an Eastern braided hairdo.

Anyway, we hope good things come to Danish and this event turns out to be a success! The event is today so if you want to go ahead and attend the event please do and we’d recommend you take pictures and share away.

Share your thoughts about the event in the comments below.

For all the latest updates stay tuned to Brandsynario!