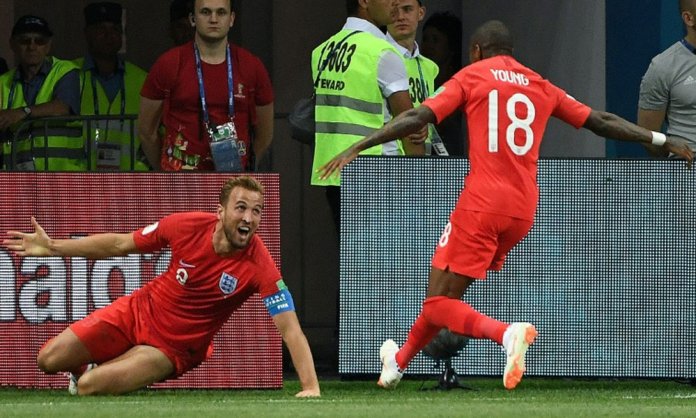 Harry Kane grabbed a dramatic late winner for England on Monday, powering home a header in the dying minutes of their World Cup opener after Belgium had earlier swept past Panama.

Gareth Southgate’s team won 2-1 after it looked as if they had squandered their chance to take all three points when they faded in the second half following a bright opening but the Tottenham striker, who also scored England’s opener, was not to be denied.

Menaced by flying insects under the floodlights in Volgograd, England raced out of the blocks and took an early lead in the Group G match through Kane.

But the young English team squandered multiple chances, with Jesse Lingard particularly wasteful, and Tunisia made them pay when Ferjani Sassi scored from the penalty spot after Kyle Walker was adjudged to have fouled Fakhreddine Ben Youssef.

Despite enjoying the bulk of the possession in the second half, England created few clear-cut chances and looked as though they would be forced to settle for a share of the spoils.

But captain Kane had the last word, heading in a corner at the back post in the 91st minute.

“It’s massive,” said Kane. “I’m so proud of the lads. It’s tough. We played so well, especially in the first half, and we could have scored a few more.

“We kept going. It’s a World Cup, you go to the last second. I’m absolutely buzzing.”

Southgate’s young charges arrived in Russia quietly confident after a solid qualifying campaign and encouraging friendly results, determined to end a woeful run that has seen England fail to win a knockout match at a major tournament since 2006.

The manager’s lack of experience was widely discussed when he was appointed but the former Under 21s coach has cultivated an atmosphere of unity and a determination to bury past failures.

England fans were outnumbered by Tunisian supporters in Volgograd after fewer than 2,000 tickets for the match were sold in Britain.

The England supporters were given a warm welcome in the city formerly known as Stalingrad and were largely well-behaved although two fans were charged with public drunkenness after being detained on a train.

Earlier, Belgium showed England, their main rivals in Group G, the way with a comfortable 3-0 win against Panama in Sochi as Dries Mertens scored just after half-time before Lukaku headed in on 69 minutes and pounced again six minutes later.

Belgium showed they might finally be ready to realise the promise of a talented crop of players as they gave Panama a torrid time in the Central American side’s first-ever appearance in a World Cup finals.

Belgium coach Roberto Martinez said he was “delighted” with the performance.

“It was exactly what we expected — there are no easy games at the World Cup. We started very well but then became frustrated as the first half wore on,” he said.

Veteran Swedish skipper Andreas Granqvist scored the only goal of the game from the spot after Viktor Claesson was upended by South Korean substitute Kim Min-woo midway through the second half.

Despite furious appeals, El Salvadorean referee Joel Aguilar initially waved away Swedish penalty claims but after consulting the video, he pointed to the spot.

Reigning champions Germany are licking their wounds after slumping 1-0 to a Hirving Lozano strike in Moscow’s Luzhniki Stadium on Sunday — the first time they have lost their opening game of a World Cup since 1982.

“I have not seen the German team so weak at a big tournament for a long time,” said West Germany’s 1990 World Cup-winning captain Lothar Matthaeus.

“Almost everything was missing. There were concentration errors, unnecessary bad passes and also the attitude was not there.”