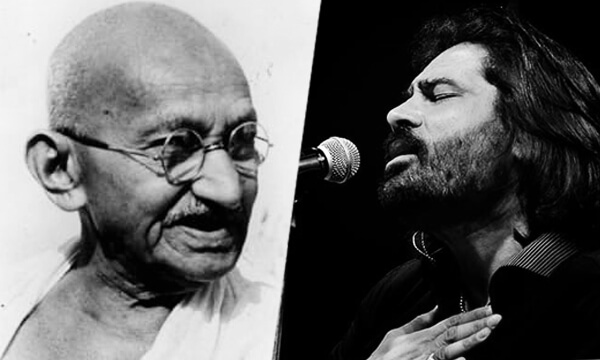 Commemorating his legacy, Shafqat Amanat Ali Khan along with other singers from 124 nations paid a musical tribute to Mahatma Gandhi on his 150th birth anniversary!

A beautiful medley of Mahatma Gandhi’s favorite hymn ‘vaishnava jana to tene kahiye je’ was put forward by these artists that became the highlight of Mahatma Gandhi International Sanitation Convention in New Delhi on Tuesday.

The world joins in paying homage to Bapu through his favourite Bhajan 'Vaishnav Jan To'. PM @narendramodi & EAM @SushmaSwaraj release a medley version of bhajan from artists of 124 countries at function at Rashtrapati Bhawan. Press Release at https://t.co/yhWnzY0Sb8 #BapuAt150 pic.twitter.com/GwQpQajvJ9

From Shafqat Amanat Ali Khan to Alexandra Maria Wilcke of Germany and Hou Wei of China, celebrity singers from all over the world came together for this musical homage to one of the most prominent leaders South Asia has ever seen!

Listen to it below!

Among the highlights of today’s programme was the excellent rendition of Bapu’s favourite 'Vaishnav Jan To' by artists from 124 nations.

This is a must hear. #Gandhi150 pic.twitter.com/BBaXK0TOf9

Penned down by Narsimha Mehta in the 15th century, the singers recreated this Gujrati hymn and turned out to be the best way to honor their leader on his 150th birthday!

Apart from the medley, the rendition of  “Vaishnava Jan” in the soulful voice of Shafqat Amanat has gone viral on the internet and is something that you want to listen to over and over again!

Considering the political situation that is prevailing between the two countries these days, this gesture from Shafqat Amanat was lauded by the Indians and diffused the tension a bit between the two nations!

And it turned out to be the most heartwarming renditions of the Gujrati hymn to many Indians!

This has got to be one of the most heartwarming renditions of Vaishnav Jan To. Watching Shafqat Amanat Ali sing is an added bonus 🙂

The world joins in paying homage to Bapu through his favourite Bhajan 'Vaishnav Jan To'. From Pakistan Shafqat Amanat Ali delivers a colourful and rich rendition of the hymn in his beautiful tribute to Bapu. Do listen! #bapu@150 @ShafqatAmanatA @Ajaybishttps://t.co/sFZtdKdq2g

They can’t stop sharing it!

Shafqat Amanat Ali from Pakistan lends his voice to a global chorus in honour of the Mahatma on his birthday! @IndiainPakistan https://t.co/NRUNy5CUKb

Moving! Pakistani singer Shafqat Amanat Ali sings Vaishnava Janato and has gifted it to India via the Indian High Commission. The high commissioner's wife @Bharati09 sent this to me pic.twitter.com/CxZj9ryT1l

Because he’s the best!

Maybe I am biased, or maybe I am not. But I liked Pakistani singer Shafqat Amanat Ali's rendering at 3.05 the best. Listen to the global Vaishnav Jan-to. https://t.co/gBsoapg1Ga

Hey @ShafqatAmanatA, thank you so much for this! Showed this rendition of yours to my mom, and she is overwhelmed (after all her favourite singer is singing one of her favourite bhajans). 😊
Also a big thank you to @IndiainPakistan for pulling this off!https://t.co/OXwG0iokzI

And many thanked him for the act that has won the hearts of many Indians!

For a refreshing start to your day!