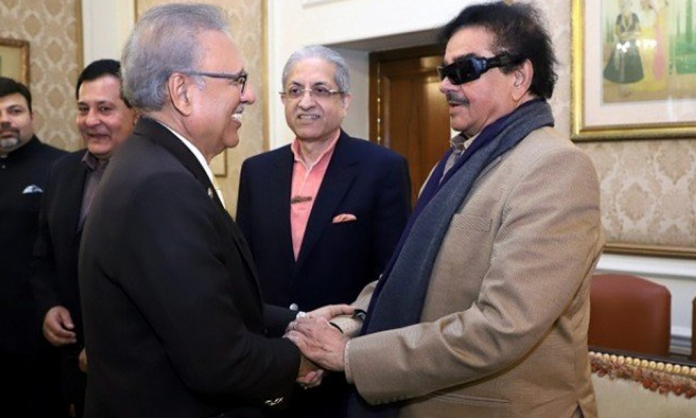 Mr. Sinha was in Pakistan to attend the wedding of a dear friend’s son. He was invited to the Governor House to meet the President.

Both of the politicians discussed many different subjects. They talked about the promotion of peace in the subcontinent.

Reportedly, President Alvi highlighted Pakistan’s peace initiatives, including the Kartarpur corridor and expressed his concerns over the human rights violations in held-Kashmir.

It was a pleasant surprise that we received an invite from the H.E. the President of Pakistan, Dr. Arif Alvi, on the last day of our stay at Lahore..that too just before the marriage reception of our family friend Mr. Asad Ehsan’s son Ahmed Asad. We were very touched by this pic.twitter.com/pzAUAjYnCP

According to the Tweet posted by the President’s account, Mr. Sinha endorsed concern of the President about the lockdown of occupied Kashmir for more than 200 days.

Indian politician Shatrughan Sinha met President Dr. Arif Alvi in Lahore today. They discussed the importance of building peace bridges across the border. Mr. @ShatruganSinha endorsed concern of the President about the lockdown of occupied Kashmir for more than 200 days. pic.twitter.com/3eiYsqRu4m

The Congress leader on his social media claimed that the visit was ‘nothing political or official’.