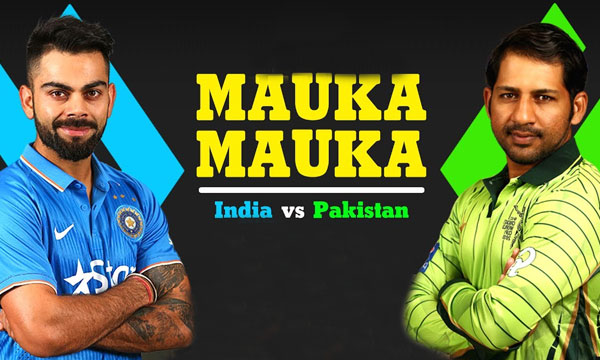 Who could have envisaged this 2 weeks ago, the last we played them in a final (major ICC event was in 1985). I certainly thought Birmingham will be the only time both of us meet.

So once again we lock horns with the alleged and supposed big brother. India, many would agree, is a better equipped and well just an organized side than Pakistan.

What we saw against England in the first semi final was well putting some method in our madness. Did we look like the Pakistan Team we all know so well? NADA!

Never have been a supporter of Sarfaraz as Captain. But I stand corrected and impressed and yearning to see more of him. He has shown a professional touch in his obvious Karachi street smartness. From being Oliver Twists Artful Dodger against Srilanka to being Agatha Christies Poirot, Cardiff stood witness to Shades of Gray ala Pakistan.

There are many differences between the two sides. India is a batting juggernaut, who rarely have stumbled in this tournament but their late middle order has hardly had a hit, that should go in our favor. India has got an eloquent more media savvy captain but he should know the backlash which awaits him and the team back home if they get defeated.

India has got an eloquent, more media savvy captain. But he should be aware of the backlash which awaits him and the team back home if they get defeated.

India is a fine team no doubt and are favorites for sure but are predictable. In comparison, there is something romantic about the Pakistani team, and please be certain, it’s not that I’m writing this and it’s my opinion is forced on you. But listen to what the cricket pundits /commentators have to say about us. From Atherton to Hussain, Warne to Ponting and a lot more:

People are gathering inspiration from Imran Khans famous cornered tiger interview 25 years ago, yes it was Ramzan and yes we had our backs to the wall. Sometimes in sport , a lot of these small little quirks rev one up and I’m sure it’s got fed into the boys in Queen country.

Romance changes everything, rebelling changes everything, new inductions have made a difference for sure. But it’s erring a bit on your natural style which has got us this far. Wanted to end this footnote on a lyric from one of my favourite songs ; which goes like this “you could be heroes, just for one day”.

Wanted to end this footnote on a lyric from one of my favorite songs; which goes like this “you could be heroes, just for one day“.

Let’s give their mauka mauka a dhoka , what say Sarfaraz?