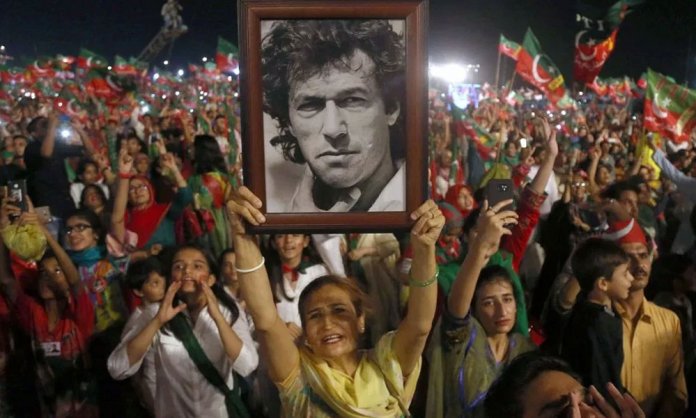 Results were still being tallied Thursday, hours after Khan’s supporters took to the streets to celebrate victory in an election opponents have said the powerful military rigged in his favour.

Local media said roughly half the votes had been counted more than 17 hours after polls closed, an unprecedented delay that has fuelled widespread fears over the legitimacy of the exercise.

But newspapers and television channels were predicting victory for Khan’s Pakistan Tehreek-e-Insaf, with the partial results giving him at least 100 seats so far in the National Assembly, the lower house.

A majority of 137 seats is needed to form a government.

The English-language Dawn newspaper declared Khan had delivered a “knockout punch”. The outgoing Pakistan Muslim League-Nawaz, meanwhile, “was faced with its toughest hour and … on the verge of collapse,” the paper said in a front-page analysis.

The Election Commission of Pakistan dismissed allegations of manipulation, blaming the delay on glitches in new, untested counting software.

Raza did not say when election authorities would be in a position to announce the results, but some media reports suggested it would not be until Thursday evening.

Late Wednesday, the PML-N, which had been in power since 2013, rejected the results because of “outright rigging”, and vowed it would use “all political and legal options for redressal of these glaring excesses”.

“What they have done has pushed Pakistan back 30 years… People will not bear it,” the party’s leader Shahbaz Sharif, brother of jailed former premier Nawaz Sharif, said.

Other major parties also alleged fraud, including the Pakistan Peoples Party (PPP), whose chairman Bilawal Bhutto Zardari echoed the PML-N’s claim that party representatives were barred from monitoring the count.

The size of Khan’s lead against the once-mighty PML-N, when many analysts had predicted a coalition would be likely, was also increasing concern over the process, analysts said.

“The surprisingly high seat total for PTI, even as the votes continue to be counted, will be enough to trigger the suspicions of the PPP and PMLN,” said Michael Kugelman, an analyst at the Wilson Center in Washington.

Neither Khan nor the military, which had been accused of seeking to manipulate the vote in his favour in the months leading up to the polls, have yet commented on the situation. Both have previously denied allegations of intervention.

The controversy follows a campaign already considered by some observers to be one of the “dirtiest” in Pakistan’s history because of the allegations against the military, and marked by the increased visibility of extremist religious parties.

“This is complete chaos,” said political analyst Azeema Cheema, who said she was “very concerned” about what comes next.

“It depends on how the civilian disobedience is being organised. You may have spontaneous riots among political party workers. Then maybe political parties will organise sit-ins and demonstrations,” she told AFP.

Kugelman shared the concern. “I don’t see any way to prevent a period of turmoil,” he told AFP.

But PTI supporters were ecstatic at the projected results.

“He motivated the youth,” Hussain told AFP in the capital Islamabad as he hit the streets to celebrate with friends.

Wednesday’s elections were meant to be a rare democratic transition from one civilian government to another in the young, nuclear-armed country which has been ruled by the military for roughly half its history.

Khan, who captained Pakistan to their World Cup cricket victory in 1992, campaigned on ambitious promises to tackle widespread graft while building an “Islamic welfare state”.

But he was dogged by widespread accusations he was benefiting from a “silent coup” by the generals.

Khan has also increasingly catered to hardline religious groups, particularly over the inflammatory issue of blasphemy, sparking fears a win for PTI could embolden Islamist extremists.

The PML-N says it is the target of the alleged military machinations. Nawaz Sharif was ousted from power last year and jailed over a corruption conviction days before the vote, removing Khan’s most dangerous rival.

Some 800,000 military and police had been deployed to provide security on election day.

But it was still marred by violent attacks. The largest, a suicide bombing claimed by the Islamic State (IS) group, left at least 31 dead and 70 wounded near a polling station in Quetta, in southwestern Balochistan province.