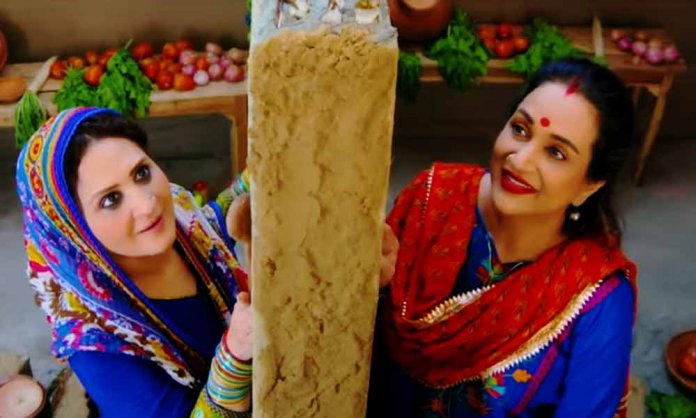 In the video, we can see Asma Abbas playing the role of a Pakistani woman while Bushra Ansari has played an India woman.

The sisters can be seen rapping in the Punjabi language from their kitchens and highlighting the similarities between the two cultures.

Bushra and Asma released the video with caption:

A music video that goes beyond war and borders to the hearts of people living so close, and yet so far away.

Have a look at the video of Humsaye Maa Jaye by Bushra Ansari & Asma Abbas below!

As soon as the video was released, a number of Pakistanis including celebrities took to their social media accounts and praised the sisters for their efforts to promote peace.

Have a look at their posts!

Oh man, this has me sitting at my desk with a tight throat and wet eyes. #BushraAnsari #AsmaAbbas https://t.co/hEcA1jypLW

#bushraansari at her best once again with her equally hilarious sister #asmaabbas. Here is a clip of their friendly neighbourhood. rap/tappa #message in #humour Check YouTube for the full song 🎶

My girls making me so proud and making the country sing and adore their message of Love. Pakistan is always a step ahead when it comes to moving forward for friendship and alliance and love and peace. Because war does nothing but destroys everything. #AsmaAbbas #BushraAnsari #PeaceMessage A poem by Neelam Ahmad Bashir.

Unsurprisingly, a few Indians also applauded Bushra Ansari and Asma Abbas for their attempt to de-escalate the tensions between the two nations. Moreover, a famous Bollywood producer Tanuj Garg also reacted to the song.

Look at what he had tweeted:

I don't think much of the #India – #Pakistan 'bhai bhai' propaganda and the various peace slogans that are bandied around. But for what it's worth, the music video (of "Humsaaye Maa Jaaye"), a "peace rap", by #BushraAnsari and #asmaabbas, is sincere and noble.Kudos to the ladies!

A number of Indians also praised the sisters!

Bushra Ansari and Asma Abbas are rapping for peace between Pakistan and India. Love from a Gwandan this side #BushraAnsari ❤️🤗
https://t.co/SphsSFwjC1

#BushraAnsari doing a great job to promote peace and harmony through this vadio. 👏👏 pic.twitter.com/P6CVOuDUEz

Helmed by Iqbal Hussain, the song was written by the third sister Neelum Ahmed Bashir.