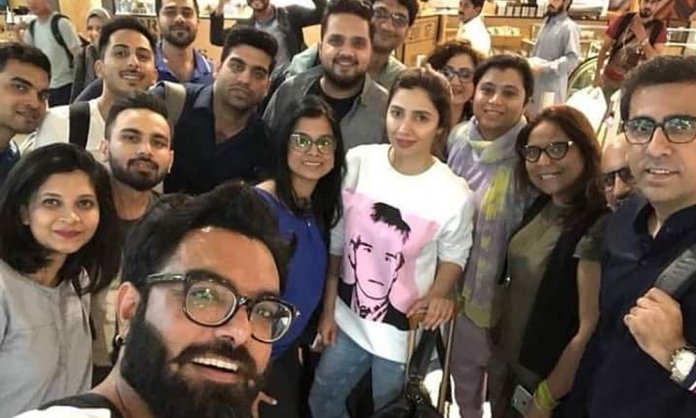 HUM TV has landed itself in a major controversy by scheduling its coveted HUM Style Awards 2018 during the Election week.

The ceremony is being held in Toronto, Canada this Saturday. Consequently, the crème de la crème of Pakistani stars is currently overseas to prepare for the show, unable to cast their vote in the elections.

So our celebrities are travelling to Toronto for the scripted #HumAwards while neglecting the fake patriotism they used to show every now and then. Pakistan needed it's citizens in this crucial time. From now on, I won't be promoting any of the #mahirakhan and #YasirHussain's stuff. Much respect for Imran Abbas for being a true patriot. . . . . #movies #theatre #video #movie #film #films #videos #actor #actress #cinema #dvd #amc #instamovies #star #moviestar #photooftheday #hollywood #goodmovie #instagood #flick #flicks #instaflick #instaflicks

Farhan Saeed was the first to lash out at stars like Mahira Khan, Kubra Khan, Yasir Hussain and Hania Aamir who flew out of Pakistan right before elections.

All the people from my fraternity & otherwise travelling abroad at such a crucial time is so heart-breaking . Please let’s not take our country’s future for granted. #Elections2018 #PakistanElections

Joining him was Imran Abbas who expressed his remorse towards all the icons who choose the award rehearsals before their nation’s future.

Social media was bound to react on the crucial matter and fans are roasting their favorite stars for ‘pretending to be patriotic’.

We should all boycott Hum Awards.
They couldn't choose any other date for their shit show and all the celebrities who were being vocal advocates of how we should perform our civic duties, did not bother to stay back to do it themselves.

An online petition has also kick-started to boycott the channel along with its upcoming award show. 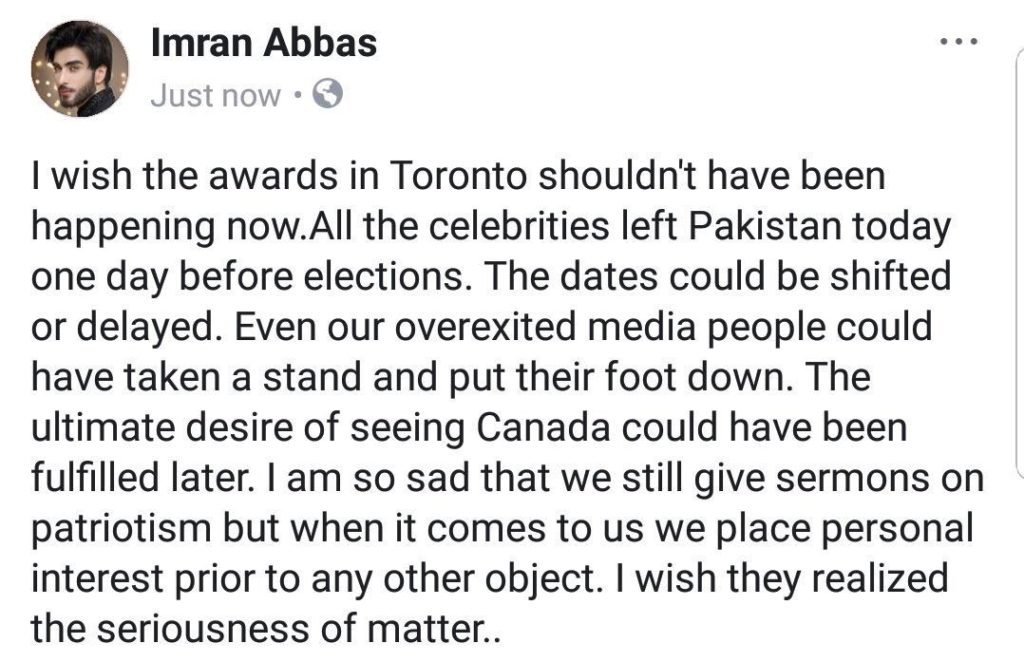 Following the backlash, HUM TV has finally broken the silence and release a statement to clarify the whole issue. 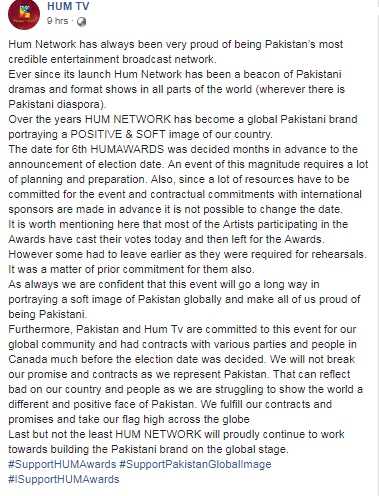 The channel made it clear that the date for Hum Style Awards 2018 was decided months back and an event so grand cannot be canceled.

HUM assured in the statement that the award gala will portray the soft image of Pakistan on a global scale.

What do you think of HUM TV’s statement about the award controversy? Let us know in the comments below.