How many moons do we have? Only one, right? WRONG!! Well, for a brilliant, albeit short, period, Earth had two moons. On February 23, 2020, a minuscule asteroid was discovered caught in orbit around Earth.

This asteroid, discovered by Theodore Pruyne and Kacper Wierzchoś at the Mount Lemmon Observatory, was named 2020 CD3. This tiny little moon is about the size of a couch with a diameter of 6ft – 11ft. But alas, all good things must come to an end, and thus, the mini-moon is no longer with us. 2020 CD3 likely left our orbit on March 7.

What is it exactly, though? Initially, astronomers thought the new moon could be a chunk of space junk; a rocket part discarded after a successful launch. To say conclusively, astronomers needed to use powerful telescopes to study the sunlight reflected off of the object, which can reveal its composition from afar.

There’s at least a small chance that it could be a piece of our moon that broke off after an impact, one astronomer hypothesized. But the latest observations suggest that the object is probably an asteroid, one of the many floating around near Earth.

“It’s just a chance occurrence,” Kat Volk, a planetary scientist at the University of Arizona’s Lunar and Planetary Laboratory, stated. “They just have to come in at the right speed and the right angle. The vast majority of things that are whizzing by the Earth do not get even temporarily captured into orbit; they just keep whizzing by”.

Often, this only slightly changes and orbit and sends it in another direction, or pulls it close by Earth without creating an impact on our planet,” he said. “Temporarily, Captured Objects are rare, and the reason is that it takes a very precise speed and direction to be pulled in by Earth’s gravitational pull, and to not impact or fly out in a new direction,” Pruyne added. 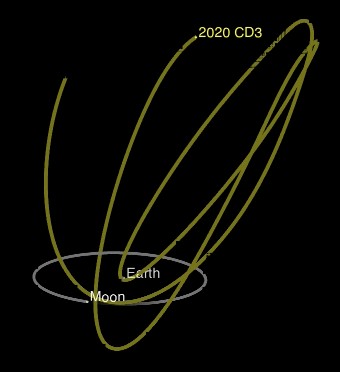 No matter how astounding this may sound, this isn’t Earth’s first mini-moon. Since the 19th century, scientists have done genuine searches for more moons. Still, the possibility has also been the subject of several dubious non-scientific speculations, as well as several likely hoaxes. The first-ever possible temporary satellite was spotted in 1913 during the first meteor procession.

Since then, there has been a flurry of discoveries, the most notable being in 2006. Other small natural objects in orbit around the Sun may enter the realm around Earth for a short amount of time, becoming temporary natural satellites. To date, the only confirmed examples have been 2006 RH120 in Earth orbit during 2006 and 2007 and 2020 CD3 in Earth orbit between 2018 and 2020.