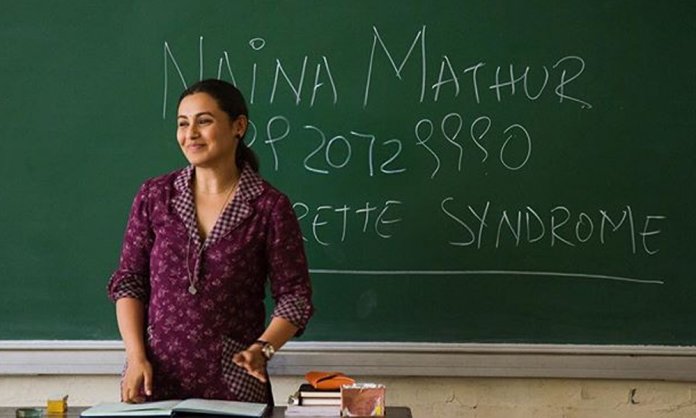 Bollywood has come up with many films in the past few years that have tackled teaching methods and suggested ways to improve the standards in educational institutions.

Be it Taare Zameen Par or 3 Idiots, Bollywood has always delivered and Rani Mukerji’s comeback film Hichki joins the list of such films.

The well-written and well-directed flick will not only take you down the memory lane but also make you realize the importance of teachers who taught with their hearts, not their minds.

Like all those in the cinema hall, you will end up teary eyed during the film and will certainly applaud when the credits will start rolling.

Naina (Rani Mukerji) is an aspiring teacher with one drawback – she suffers from Tourette Syndrome and can’t seem to speak a sentence without a hichki.

‪#RaniMukerji is ready to begin #Hichki promotions on an auspicious note, on Makar Sakranti. | @yrf ‬

That’s one of the main reasons why she doesn’t get a job anywhere despite being overly eager and highly qualified. When she does get a chance to teach in her alma mater, she takes it up as a challenge even though the section she is assigned has the most troublesome students in the entire school.

They mock her, scare her and even paste her mobile number on the school wall but she doesn’t back down.

With her ingenious way of teaching, Naina manages to surprise the principal as well as win the kids’ confidence, turning them into better students. How she does that is what the film is all about!

Rani Mukerji does an Aamir Khan in Hichki and wins the audience over with her portrayal of a teacher who makes hics and click noises due to Tourette’s.

She makes the cha cha and wa wa sounds so effortlessly that you feel like rooting for her whenever she comes on screen.

The constant rubbing of her throat, the confidence with which she handles her problem is what might help her win an award next year. It is films like these that she must do in the future so as to stay connected to her fans and make new ones.

‪#RaniMukerji and @karanjohar will soon reunite after 5 years on the @starplus show India's Next Superstar, where Rani will probe Karan’s real-life hichkis. | #Hichki | @yrf ‬

The school kids are a delight to watch especially when they are not in school, giving authenticity to their backstories. Neeraj Kabi’s portrayal of a Science Teacher who doesn’t like the sadak chaaps is as good as it gets, making Hichki a must-watch film.

Hichki is the indianized version of Front in the Class which also tackled the same situation with the teacher being a male one instead of a female one.

Yes, there are no song and dance numbers here but the content is so strong that you will keep glued to the screen and wonder what will happen next despite the predictable end.

#RaniMukerji will promote #Hichki in not 1 or 2, but FIVE languages to reach out to as many audiences as possible, without any Hichki.

Siddharth P Malhotra’s direction must be appreciated here because not only does he make the entire cast of nobodies act as if they are somebodies, he also extracts the best from his leading lady who is no more the bubbly girl she was back in the day.

#RaniMukerji and #SouravGanguly are all set to come together for Sourav’s hugely successful Bengali reality TV show #Dadagiri. @yrf

In this emotional rollercoaster, the presence of veteran actor Sachin as well as youngsters who play school kids is a welcome sign that even without big names, one can make a good film.

Go ahead and watch the film – with your friends if you can – because it will transport you back in time and make you want to thank the teachers that made you whatever you are today.

The Importance Of “Me Time” In A Relationship