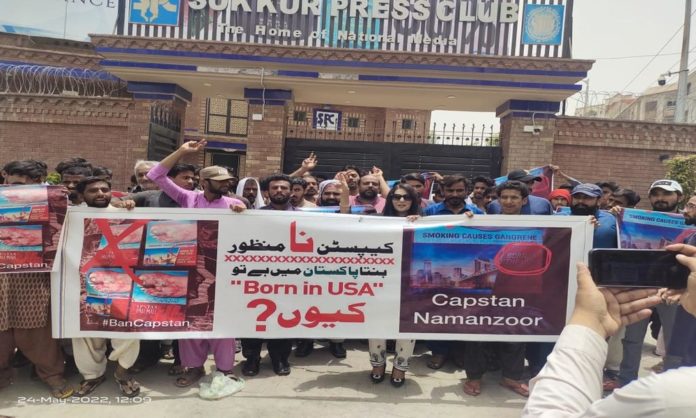 While the ban on imported products has caused a nationwide frenzy, a very well-known brand in Pakistan is doing things that don’t make sense. Capstan, a renowned local cigarette brand made in Pakistan, is under fire for claiming to have been produced in the USA.

People are boycotting Capstan in an attempt to raise voices regarding the hypocrisy of the brand. The local brand, which is thought to be manufactured in Pakistan, has written ‘Made In The USA’ over it, claiming that the production of the cigarette brand takes place in America. As a result, the locals have raised the issue in an attempt to boycott the product.

People have taken to social media to share the hashtag #CapstanNaManzoor #Bancapstan. Meanwhile, a protest in Sukkur, Sindh by the locals was held in front of the Sukkar Press Club.

Here’s Why Locals Want A Ban On Capstan

According to the protestors, the box label says, ‘Made in the USA’. Meanwhile, it is made in Pakistan. The issue created quite a stir among the users as they questioned the brand’s move. The protestors demanded an immediate ban on the cigarette brand.

Meanwhile, the protest got coverage on all the major social media platforms. The protestors shared their views regarding the situation at hand, claiming that Pakistan doesn’t lack anything when it comes to resources. Still, unfortunately, the brands don’t think twice before claiming the product is imported even though the production takes place locally.

The protestors, on one occasion, burned the boxes of Capstan while screaming Ban Capstan at the top of their lungs. They also pleaded with the public to start using locally made products instead of imported ones.

Twitter users took to the platform to share their views as well as to raise their voices regarding the ongoing controversy. Take a look at some of the reactions below.

I just can’t understand this kind of state of mind when something is being made in pakistan why they need to portray that it’s From USA this kind of brands needs to be banned for life @ImranRiazKhan #CapstanNamanzoor#MarchAgainstImportedGovt pic.twitter.com/DDvpx59dqW

It was the worst marketing idea to trick their users into believing that the product was made in USA when the whole country is protesting against the imported items from that country. 😂😂😂#CapstanNamanzoor https://t.co/bB9WACqJiH

Such a disappointing act by the brand, they should be banned in Pakistan.

What do you think about the current situation? Let us know in the comments below.