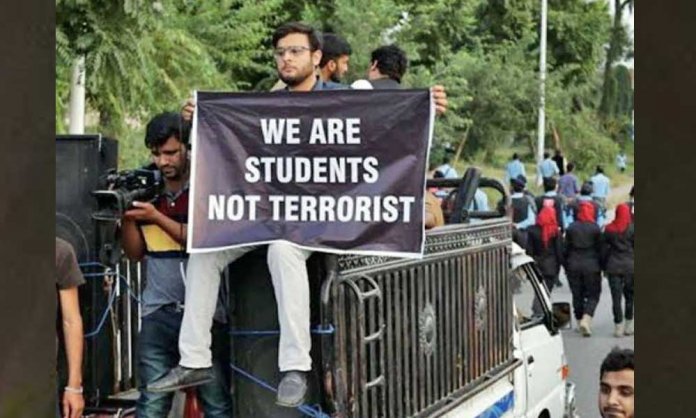 Merely a few weeks ago a video surfaced from the Faiz Festival at Alhamra Lahore, where a group of students was performing one of Faiz’s famous poetry in the most eccentric manner. They were heard chanting “Surfaroshi ki Tamana Ab hamary Dil main hai”, which particularly resonates with their state of denial to basic rights.

That group of students is the force behind Student Solidarity March with solid motives and ambitions. They become the voice of Pakistani youth to highlight the issues faced by them on a regular base.

Their demands are nothing fancy but very minimal! Basic education made affordable for everyone, removing the ban from student’s union and no more budget cuts for higher education are few of them.

The student’s union ban dated back to 35years, when former military ruler Zia-ul-Haq barred the gathering of students at the campus of colleges and universities to demand their rights. And the ban continued to silence many voices for 35 years. Now the students are united and are very loud and clear about their rights. Their demands include:

After knowing all these demands we approached the organizer of Progressive Students Collective and Haqooq-e-Khalq Movement to know the inspiration behind this Students Solidarity March.

What motivates us to start this revolutionary campaign are the lives that we have been forced to lead. Days on campus are ordeals that make us go through severe forms of torture. The quality of our education is taking a nose dive while the cost of education has never been this high in the university. Our departments are becoming centers of incompetence and we have been left far behind the world in terms of research, knowledge production and employment – By Raza Gillani

The students are facing a lot of trouble for raising their voices and just a few days ago, Punjab University canceled a degree of an M.Phill student just because he was an active member of the Progressive Students Federation of Pakistan. This unjust act by the University of Punjab has been condemned on a government level. The Minister of Human Rights expressed her exasperation in her latest tweet.

For a university to cancel a student's degree which he earned through his academic endeavours is blatantly political & unwarranted. By taking such an action University is itself acting politically in retaliation 4 what it perceives as a pol act! This is against all academic norms

Today, these young men and women have taken the streets of major cities of the country to peacefully claim their rights without involving in unlawful activities

This young blood is above cast, color, and the language they are united

The youth of our country is alive and starving

Students marched for #MashalKhan to save future Mashals in our Universities. Listen to Lala Iqbal (Mashal’s father) who attended #StudentsSolidarityMarch pic.twitter.com/VZXroIaMkQ

March is continued today nation-wide and it’s probably going to start a revolutionary period in our country.

Share your views about Students Solidarity March in the comments below.