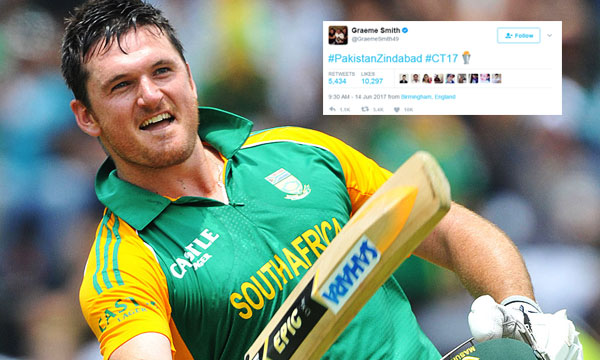 Even after the defeat against India on June 4th, Pakistan Cricket Team managed to beat all odds and out-performed itself while taking on competitive teams including South Africa, Sri Lanka, and England.

Even though the chances seemed slim, the Green Team awed every spectator with their marvelous performance and won the heart of Graeme Smith,  former South African cricketer and skipper.

After Pak took on England, qualifying for the finals, Smith expressed his love for the team on twitter.

However, soon after many Indians started to bash the ex-cricketer by giving examples of how India defeated their rival by a huge margin and that history will repeat itself, while others asked him if he had lost his marbles.

India is Burning so Bad!

What a shameless choker 😷😷

Time to put some Burnol maybe?

Why are you supporting Pakistan?

Dude, Y U SO JEALOUS?

Look Who is Talking!

@GraemeSmith49 grow up buddy.
Don't remove frustration of your lose against india through supporting pak.

LOL We Don’t Think Smith Got What he Said!

Your Mama Should Slap You Instead!

But Pakistanis Gave Some Love Back to Smith!

The Cricketing world misses your presence, particularly your captaincy.

So WTF with you if he's supporting Pakistan? Jealous he hotey rehna hameesha

I love you so fucking much for this tweet.

We Love you, Smith! Thank You for your support, Pakistan Zindabad!