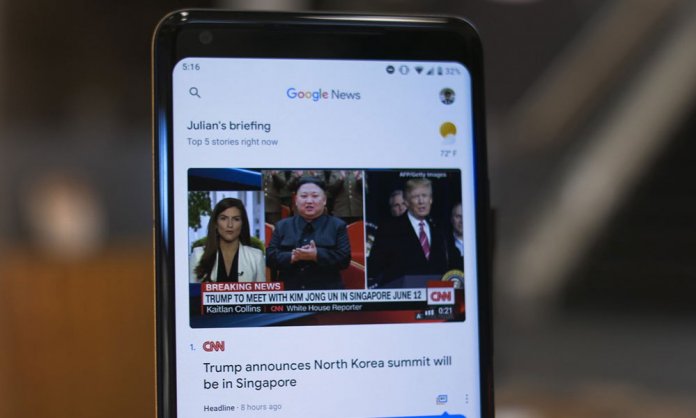 For its updated news application, Google is doubling down on the use of artificial intelligence as part of an effort to weed our disinformation and help users get viewpoints beyond their own “filter bubble.”

Google chief Sundar Pichai, who unveiled the updated Google News earlier this month, said the app now “surfaces the news you care about from trusted sources while still giving you a full range of perspectives on events.”

It marks Google’s latest effort to be at the centre of online news and includes a new push to help publishers get paid subscribers through the tech giant’s platform.

According to product chief Trystan Upstill, the news app “uses the best of artificial intelligence to find the best of human intelligence — the great reporting done by journalists around the globe.”

While the app will enable users to get “personalized” news, it will also include top stories for all readers, aiming to break the so-called filter bubble of information designed to reinforce people’s biases.

“Having a productive conversation or debate requires everyone to have access to the same information,” Upstill said.

He said the “full coverage” feed would be the same for everyone — “an unpersonalized view of events from a range of trusted news sources.”

Some journalism industry veterans were sceptical about the effort to replace human editors with machine curators.

“Nobody has ever gotten it right. I think that news designers and homepage editors do a good job of curating already.”

Google and Facebook have also been criticized for scooping up most online ad revenues and for enabling false information to spread.

Recently, News Corp. CEO Robert Thomson called for an “algorithm review board” that would “oversee these historically influential digital platforms and ensure that there is no algorithmic abuse or censorship.”

In the new app, Google’s “news stand” addresses some concerns by allowing users to sign up for subscriptions using their Google accounts, and will enable publishers to connect with readers directly.

Dan Kennedy, a Northeastern University journalism professor, said the revamped news app appears to be positive for the news ecosystem.

“For many years, Google refused to share ad revenues with news organizations on the grounds that Google was driving traffic to them, and that it was up to those organizations to figure out how to monetize that traffic,” Kennedy said.

“Now, with more than 90 percent of all new digital ad revenues going to Google and Facebook, Google is finally acknowledging that it’s time to try something else.”

Nicholas Diakopoulos, a Northwestern University professor specializing in computational and data journalism, said the impact of Google’s changes remain to be seen.

Diakopoulos said algorithmic and personalized news can be positive for “engagement” but may only benefit a handful of news organizations.

His research found that “Google concentrates its attention on a relatively small number of publishers, it’s quite concentrated.”

Google’s effort to identify and prioritize “trusted” news sources may also be problematic, according to Diakopoulos.

“Maybe it’s good for the big guys, or the (publishers) who have figured out how to game the algorithm,” he said. “But what about the local news sites, what about the new news sites that don’t have a long track record?”

Diakopoulos said that while AI can offer some advantages in news curation, “you still need people involved in many different ways. you need to reflect human values, editorial values… you can’t quantify every aspect that might be important to an editorial decision.”

The growing importance of the platforms raise the questions of whether Google and Facebook are “media” companies and not simply technology firms, a moniker both have resisted.

Diakopoulos said Google “is becoming more and more like a media company,” although that is sometimes difficult to define.

“Yahoo started as a tech company and became a media company, and maybe Google is headed in that direction,” he said.