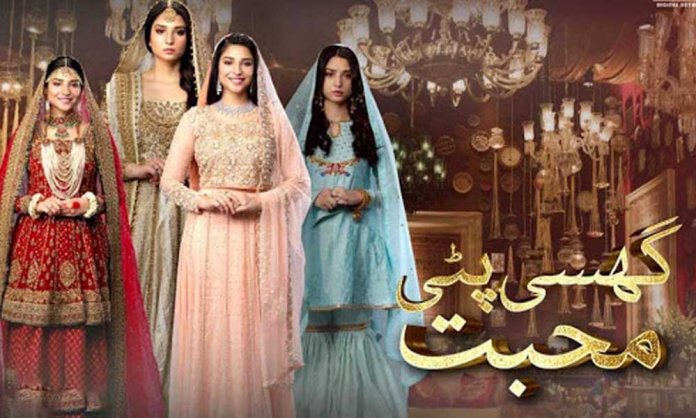 ARY Digital’s Ghisi Piti Mohabbat ended last night after airing double episodes. Overall, the drama had much to offer, even if it was reactionary to the core.

With the exception of a few, most Pakistani television dramas are about domestic violence, evil in-laws, and an always crying female lead who has to wait for a knight in shining armor. In fact, if a woman has the trait of speaking up for herself, she is most often the antagonist. A case in point is the character of Zareen, played by Arij Fatima in Hassad or Hira Hussain as Shiza in Parchayee.

Amidst such characters and dramas, the dark comedy Ghisi Piti Mohabbat is undoubtedly a breath of fresh air. It shows that if a girl is speaking for herself, she does not necessarily have to be the villain of the story.

Secondly, the protagonist Samiya (Ramsha Khan), is shown making decisions for herself. Upon this, one can say that the drama portrays bad luck usually follows an independent girl. Interestingly, however, it doesn’t do that. Instead, it shows that even with bad consequences, the protagonist is satisfied that she was responsible for them. She says so herself in the last episode. And it was a much-needed statement considering we saw the female lead in Dil Ruba being herself was portrayed as wrong. She had to ask for forgiveness to have the happy ever after.

More importantly, the drama shows that Samiya was involved with four men, had three weddings, and had been harassed countless times in her workplace. But she never lost her self-esteem. In fact, she could always call out the harasser. Even at home, her family would not victim-blame her when she would tell them what happened.

Samiya as a character

As it is clear, the drama was already pretty woke. It showed an average Pakistani woman and that she was not always crying. What hits, even more, is that Samiya goes through quite a mess where her first husband steals her jewelry for another woman. Her second husband marries her to satisfy his lust, and her third husband is clearly into his widowed sister in law. Not to mention that the fourth potential husband leaves her for another pretty girl. But she does not become a man-hater. She believes that every person has the right to be judged individually.

After going through all that and being harassed once last time at her workplace, she decides to run a business, something she can do well. She opens up a food cart, and with her hard work, she ultimately owns a restaurant.

Now you may be thinking that this review was supposed to be negative. Actually, the point of the review was that the drama itself was woke enough. It was a story of a girl who values herself, takes decisions, and learns that she does not need a knight in shining armor to succeed. All she needs is to believe in herself. However, one can also say that she had this understanding even in the first episode, so technically, there was no character development in Samiya.

But the point of discussion is the last episode. The drama was about the struggle of a cis-gendered woman struggling in her love life and work life, the issues she faces, and how she came up with the solution. But in the very last episode, the story decided to brush past another major phenomenon, the lives of the Khwaja Sira community. Just out of the blue, Samiya offered two people from the community begging for money, a job. So basically, it touches upon the issue that the Khwaja sira community is unable to find employment.

Even though it is a great idea, the fact that Samiya wants to open a safe space for women but if in the entire 25, 26 episode span you have not featured the struggles of the transgender women, forcefully adding it to ensure the drama is radically different from other mainstream shows is just weird.

Basically, what I am trying to say here is that the drama creators could have either explored the story from the Khwaja sira community perspective in the drama better. Or they shouldn’t have done it at all if they were going to do it this way.