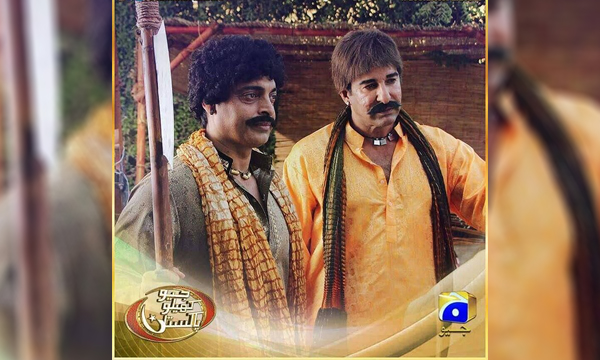 We already know that this year Geo TV’s Ramadan transmission, “Dil Dil Ramzan” will be hosted by popular ex-cricketers, Wasim Akram and Shoaib Akhtar. But they also have something exciting for us in store with a new game show titled Geo Khelo Pakistan.

Geo Khelo Pakistan will be aired after Iftar transmission. The days are yet to be announced

Latest pictures of the duo in a complete makeover as Maula Jatt and Noori Jatt have been circulating on the Internet creating a frenzy amongst people.

The action film from 1979 was a classic and the two characters are etched in our memories forever. Akram and Akhtar will be donning the new look for a game show they will be hosting for the segment “Geo Khelo Pakistan” held during the daily Ramadan transmission.

The Sultan of Swing, broke the news about Geo Khelo Pakistan to his fans and followers.

The dynamic duo is definitely making the best of their fun get-up for Dil Dil Ramzan. Watch the short video clip posted by Shoaib Akhtar here!

Hearing the news, Shaniera Akram, wife of Wasim Akram had this to say:

Looks like the Australian beauty is not totally loving her husband’s new look.

What did you think of Wasim Akram and Shoaib Akhtar’s new avatar for Geo Khelo Pakistan? Let us know in the comments below.