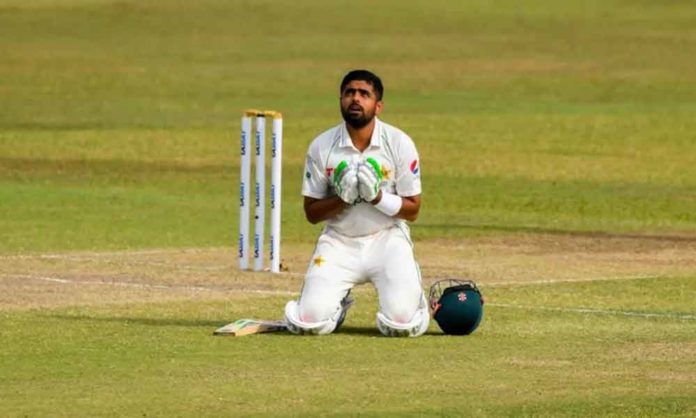 Babar Azam is arguably the best all-format batsman across the globe at this time, and his rankings reflect that too. He is the no.1 batter in ODI and T20 rankings, as well as at no.4 In Tests, only 30 points behind Steve Smith at no. 3. But what he did at Galle today was nothing less than a masterclass.

He walked down to the middle with his team struggling at a difficult pitch. Pakistani openers fell cheaply, and an out-of-form Azhar Ali followed them too. Babar was the only hope to save the ship, as there was no Fawad Alam in the middle order and his replacement Salman Agha fell making only 5 runs.

There is a saying, ‘when the going gets tough, the tough gets going’; that’s exactly what happened in Babar’s case. just when the danger of following on was hovering over Pakistan, Babar Azam played a captain’s knock to guide his team to a safe total. Babar was unfazed throughout his innings, while the wickets kept tumbling down on the other end. Babar Azam scored 119 off 244 balls, and the next best score was 18 runs by Yasir Shah.

Babar and Naseem Shah had a key 70-run partnership for the last wicket, assuring that Pakistan only ceded a four-run first-innings advantage.

This was Babar’s seventh century in Test cricket, and his second in 2022; he also scored a century against Australia in March. He currently averages above 45 in all international formats, solidifying his reputation as the finest player in the world across all formats.

He received a lot of praise for his valiant effort. Former players and fans across the globe applauded how he handled the pressure and remained calm on a challenging surface.

This is the highest contribution ever by a Pakistan captain in an all-out Test innings. Previous best: 52.82% by Hanif Mohammad (187*/354) vs England at Lord's in 1987.#SLvPAK #SLvsPAK #PAKvsSL

What a knock it was to witness live from @babarazam258 today, a well deserved century indeed under pressure situation paired with @iNaseemShah’s patience. Time to win it from here boys, In Shaa Allah 🇵🇰🙌🏼#SLvPAK