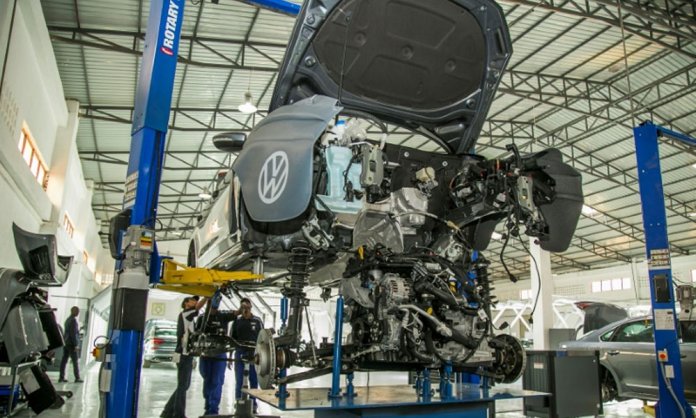 The first Rwandan-made Volkswagen car rolled off the assembly line on Wednesday at the country’s first auto factory.

“Some found it hard to believe that German cars could really be built in Rwanda. Yet today, the first vehicles are rolling off the assembly line,” Kagame said.

“This facility undoubtedly represents a new chapter, in Rwanda’s journey of economic transformation,” he said.

Kagame used the event to repeat his argument in favour of domestic manufacturing over foreign imports, a stance that has got Rwanda into a mini-trade war with the United States over second-hand clothing.

“Africa and Rwanda deserve better and this is one way of showing we can afford it,” Kagame said.

As with second-hand clothing, Rwanda introduced higher tariffs for second-hand vehicles in 2016, a move that will benefit Volkswagen which aims to assembly 5,000 cars a year at the factory, including the Polo as well as the Passat estate car and Teramont 4×4 models.

However, at a cost of around $15,000 for the cheapest, the vehicles will be out of reach for most in Rwanda, where per capita income is just $740 per annum.

“Obviously there are some challenges, but there are great opportunities as well,” said Schafer.

Volkswagen plans to introduce an Uber-style ride-hailing service in partnership with local software company Awesomity Lab whereby new vehicles will be hired hourly as taxis and then sold on second-hand after some years use.