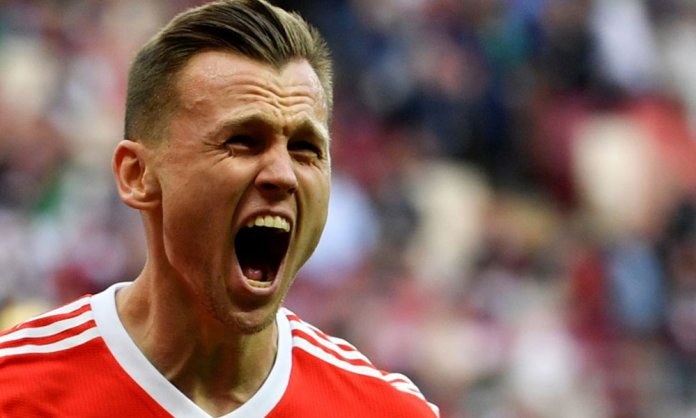 Russia’s last World Cup game against Uruguay brought the overachievers down to earth with a thud. Their next one against Spain might just send them over the moon.

The hosts play their most important match in three decades when they face the 2010 champions in Moscow on Sunday in the last 16.

They are making their first appearance in the World Cup knockout stages in the post-Soviet era as the ultimate underdogs — Spain have not lost a match in two years while Russia entered the tournament without winning a game in eight months.

The last competitive match between them saw the Spaniards prevail 3-0 in the semi-finals of Euro 2008.

“We want to perform a minor miracle,” said Russia forward Artem Dzyuba. “We want to give our supporters an even bigger present.”

The month-long extravaganza has always been about much more than football to Russian President Vladimir Putin.

The hosts are spending a record $13 billion to put on a show that projects Putin’s vision of Russia as a global power that has regained its Soviet might.

Russia’s stadiums were meant to wow the crowds. Its football team was not.

And then it did.

The men in red kicked off the tournament in Moscow’s 80,000-seat Luzhniki Stadium — the crucible of Soviet and Russian sport — with a 5-0 thumping of Saudi Arabia.

The performance, including two goals from midfielder Denis Cheryshev, made a mockery of Russia’s ranking as the tournament’s worst team.

But it also came against lowly opposition and left many feeling a sense of relief that their lowly Sbornaya were not embarrassed on the world stage.

The win came with its own caveat: Salah was not at his best after a shoulder injury he suffered in Liverpool’s Champions League loss to Real Madrid.

Yet Russia really were looking better than advertised. The number of fans who thought they might actually win the whole thing edged up from 11 to 14 percent.

And then came last Monday’s 3-0 defeat to Uruguay in a game that decided who finished first in Group A.

“Welcome back, Sbornaya!” said one sardonic tweet when the score was 2-0 and Russia were down to 10 men.

“I finally recognise my team,” another quipped.

The number of Russians who still thought their team could become champions promptly fell to six percent.

Russia now return to the Luzhniki for the Spain encounter, with no one seemingly certain about how good they are.

A victory would be a famous one. A defeat would only confirm doubts that have surrounded the team since the Soviet Union’s collapse.

The Soviet Union reached the last 16 at the 1986 tournament in Mexico, losing 4-3 to Belgium in extra time.

That squad featured the great forward Oleg Blokhin and agile goalkeeper Rinat Dasayev. The team went on to lose the final of Euro 1988 to Ruud Gullit’s Netherlands.

A similar result against Spain would see the Russians leave the tournament with their heads held high.

“We are simply delighted with making it out of the group,” local organising committee chief Alexei Sorokin said.