Pakistan’s fashion industry has demonstrated great growth potential over the last decade. With an increase in demand locally and globally, higher earnings follow.

According to reports, the Federal Board of Revenue (FBR) has issued warnings to 24 famous Pakistani bridal dress designers for allegedly being involved in tax evasion.

Some of the famous designers who sent this notice by FBR, included Sania Maskatiya, Wardha Saleem, Amna Chaudhry, Nida Azwer, Natasha Kamal and others.

The FBR said that he came to surface while their tax returns were being analyzed and an audit was being conducted.

Moreover, the bureau said that the information about the designers’ income will be matched with their declared Income and Wealth statements filed.

“Some of the designers even charge millions for a single dress but when their income tax returns were analyzed it was found that quite a large number of these dress designers were paying the very meager amount of tax i.e. their declared income does not commensurate with their receipts,” 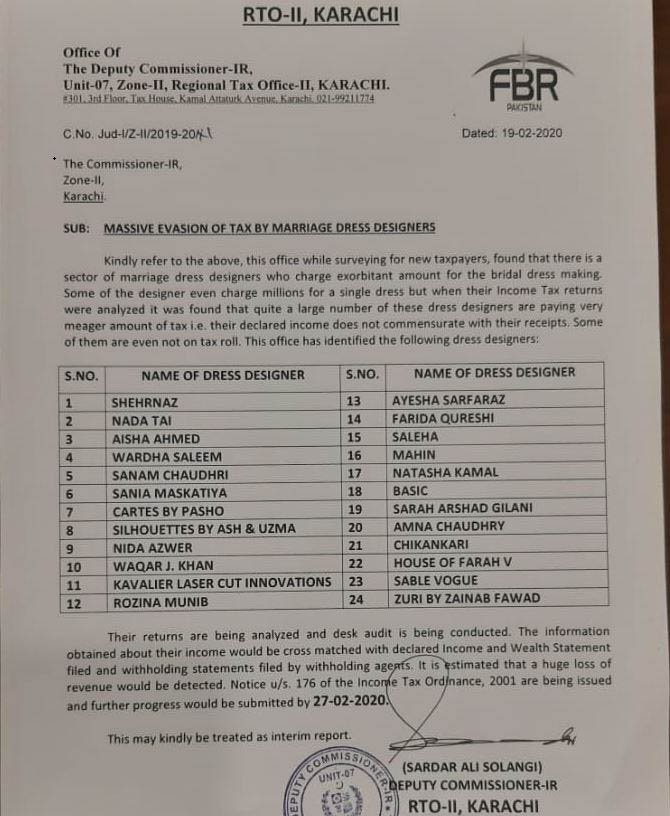 Well, we’re yet to hear from the above-mentioned designers and what they have to say about the notices they’ve been sent.