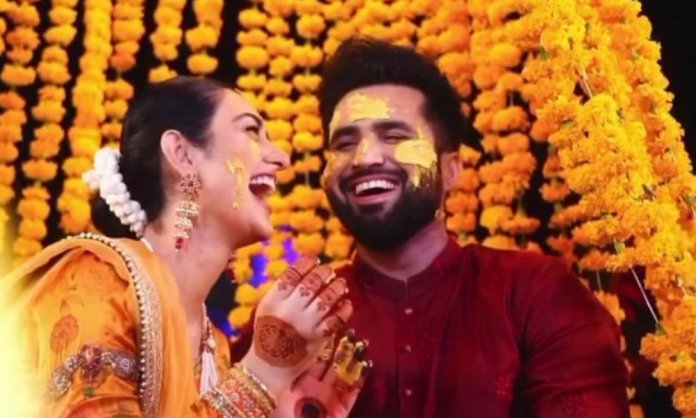 This Pakistani actress and singer Falak Shabir, have finally tied the knot!

Sarah Khan and Singer Falak Shabir are happily married now after tying the knot in an intimate nikkah ceremony held on Thursday. Although many of Sarah’s fans knew she was in a relationship, no one knew who the lucky guy was.

The wedding of Sarah Khan and Falak did come out as a surprise because the two kept it very discreet, and no one had a clue about it. Most celebrities tend to share every moment of their journey with their fans; however, with Sarah and Falak, things were different as they chose to keep things low-key.

It was indeed a surprising shocker when Sarah decided to break the news on her Instagram account by posting a picture with a caption that read.”I said, YES”. Well, that was some announcement. Even after the announcement, the beautiful actress still chose not to reveal the name of her fiance. Well done, Sarah!

And well, the two lovebirds finally tied the knot yesterday in an intimate ceremony! have a look at this video

What also grabbed the audience’s attention was Falak Shabir’s Instagram story. In his story, Falak made a video of Sarah’s hand holding his where his tattoo on his arm was quite prominent. The tattoo read, ‘My QUEEN Sarah.’ Well, it seems like Falak decided to prove his love for his adorable wife this way!

As the picture went viral, social media users couldn’t help but comment on his tattoo. The keyboard warriors started preaching religion and decided to teach the newlywed couple about what’s right and wrong in Islam. 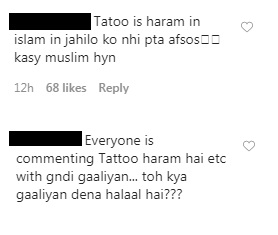 Some advised them not to post such pictures on social media as many users online can take inspiration from such things.

Others went on to congratulate the newlywed couple but ended up telling them how getting a tattoo is haram in our religion.

As most of us know that tattoos are considered to be taboo in our society, regardless, they are becoming quite common among people. Be it, men or women, many of them are now making up their minds on getting one.

However, when it comes to social media, people should refrain from discussing religious affairs on such platforms as many times, things have backfired, adversely.