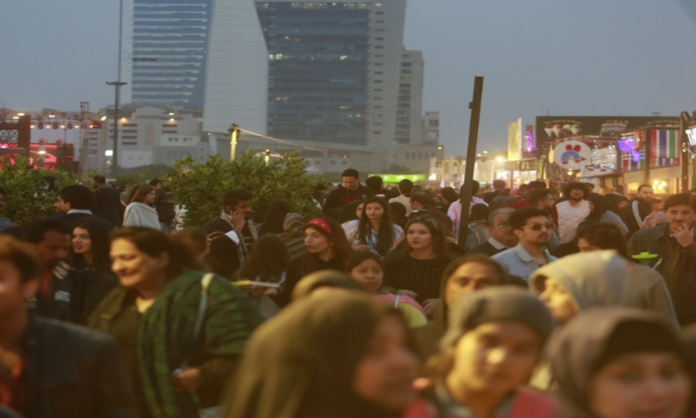 Every year, the people of Karachi look forward to the biggest food festival of the year. Eat’23 took place in Karachi Beach View Park on 6th, 7th and 8th January 2023. People from all over the country came to the festival to have a good time; setting a new record for the highest people turnover at Eat in the last 10 years.

The festival was supposed to be safe and secure along with being fun for everyone. However, things took a bitter turn. With the entrance fee being only Rs.600, the first day, thousands of people showed up. Security was extremely alert at the entrance and exit. The management made sure the “no stags allowed” rule was strictly followed. But, unfortunately, once the visitors had entered the premises, there was no security to maintain control. The first and second day went smoothly, but the third day of Eat has caused an uproar on social media because of the incidents that took place.

Because the number of people increased unexpectedly, the “stags” were somehow able to get inside. They broke the gates and forcefully barged in when stopped by the bouncers. After that, women at the event were treated inappropriately by the men that entered by force which later led to brawls between them and the men with families.

The situation escalated quickly with all sorts of people entering forcefully. Families and groups had no other choice but to escape the park as soon as they could. The management of Eat took immediate action and cancelled all performances there and then. They got the live artists and people to safety as fast as they could.

Who Is To Really Blame?

Soon, the management of Eat started to get extreme backlash from netizens. But is the management of Eat the only ones to be blamed? Pakistan as a nation has time and again shown that maybe they do not “deserve” such events. Previously, such incidents have occurred at other events like concerts of Talha Anjum, Natasha Baig, Atif Aslam and many other artists. Despite the security being extremely well trained and well equipped, the crowd present has misbehaved. So, cases like these make one adamant to believe that maybe there are groups of individuals that will always show a lack of decency and common sense when attending such events no matter the management.

Response From The Eat Management

Even after getting immense hate from the public, the management of Eat came out with an apology. Here is what Omar Omari, CEO Eat Food Pakistan had to say,

“The Eat Festival came to life 10 years ago with the aim of bringing diverse good food, the citizens of Karachi and music all together under one roof. Over the years, we have taken the brand to Lahore and Islamabad with the same aim in mind. Despite our most stringent efforts, the closing day of our 10th Eat Festival saw unruly crowd behavior and some very unfortunate and sad incidents occurred. This vengeful disregard for rules and regulations gave rise to events that caused much discomfort to innocent people as gate crashers ran amuck. The crowd at the venue on Sunday was less in absolute numbers than on Saturday but because there were no unruly gate crashers, the first two days ended on a civilized note. Regardless, we are collecting the data and conducting a deeper investigation into the
matter of surveillance, breach of boundary walls and the need to up the restrictions of what is brought into the arena. Our thoughts and sincere apologies for all who were affected by the unruly crowd and the innocent people who were caught in the crossfire.”