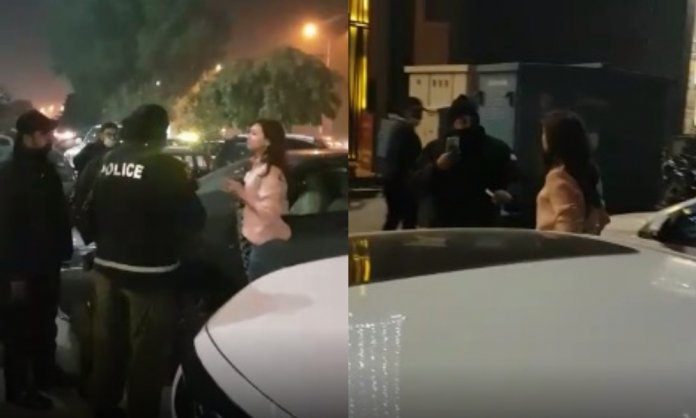 A situation involving alcohol, a woman and a police officer got out of hand in Lahore’s posh area yesterday. As disappointing as the event may be, it is sadly a routine.

Sources have confirmed that the restaurant was Gloria Jeans in which this incident happened although now reports are leaving out the name. A woman at said restaurant, in DHA, was consuming alcohol in public. Naturally, a police guard came and asked her to stop this activity as it is illegal too.

To what effect did he stop her? She started abusing him! Not just verbally but also literally and there are videos that prove that.

See The Video For Yourself

Authorities say the intoxicated woman had first misbehaved with the staff of the café before coming on the street outside https://t.co/praMa9Wboe pic.twitter.com/hNEG4FvHRs

What Action Is Being Taken?

The suspect got in the car with her friends after and left the scene. The restaurant has also reported that she heavily misbehaved with the staff of the restaurant before too. After the videos went viral, CCPO Umar Sheikh took notice of it and promised that he suspects would be arrested in no time.

Moreover, he applauds the said guard for not responding to the woman physically despite her misbehaviour.

The Elites and The Educated, Represent!

This incident occurred at the most posh area of Lahore, where restaurants are flooded with the so-called elites and the so-called literate people. Such is the state of such prestigious people, that when they are denied something, their privilege instructs them to start getting physically abusive.

If a guard ever stopped a woman from a lower economic background, do you think she would respond this way? Never! The woman responded like she did because she knows her ‘money’ and her ‘connections’ will help her evade accountability. If the leaders of this country can do that, so can she!

If The Tables Were Turnt

This situation is incredibly problematic also because of the fact that the woman felt she had a right to thrash the police officer. If the tables were turned and there was a policewoman who had stopped a male from something, would we accept the male hitting the female officer?

The question remains: people need to raise their voice against this more loudly!

The fact that the guard in question was a male is not grounds to assume he can be hit. Had he responded, given the woman delivered the first hit, would we accept that?

Let us know what you think in the comments below!