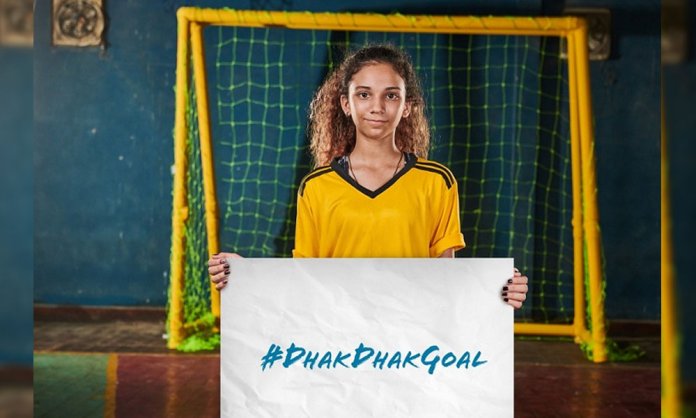 Jonathan Lister said, “Speak to your audience in their language about what’s in their heart.”

In the recent few years, Pakistani brands have recognized the sheer brilliance of emotive campaigns and have responded with realistic and relatable ones.

After all, they are turning out to be effective for the brand and are successfully compelling the audience to respond to them.

In focus, today is the recent creative campaign by Peek Freans Chocolicious “Yeh Hai Meri Game”, which has now joined the ranks of one of the most impactful promotions in Pakistan’s advertising landscape.

The 20th edition of FIFA World Cup kept the whole of Pakistan hooked throughout last month. The championship was a blast for football fans and created a lot of memories; from Ronaldo’s hat-trick against Spain to Neymar’s hilarious antics, Salah’s early dismissal to Germany’s unexpected departure; the tournament was an emotional rollercoaster ride.

Indeed, the popularity of this adrenaline-pumping event was bound to make FIFA 2018 a hot favorite amongst brands. Peek Freans Chocolicious too become a part of the epic event with their campaign ‘Yeh Hai Meri Game’ and took football fever to new heights.

The campaign sought to engage the football enthusiasts in Pakistan while empowering them to embrace their passion and inspiring them to rise to overcome barriers and represent Pakistan on the international front and truly own it as ‘Yeh Hai Meri Game’.

Under this umbrella, Peek Freans rolled out the power-packed anthem #DhakDhakGoal, connecting Pakistan and bringing together people of all ages, genders, and societies. From the streets of Lyari to the lush green grounds of Lahore, the rendition showcased the passionate story of what football means to young Pakistani men and women.

The vibrant film was intended to get everybody in the spirit. The desi beat, crisp colourful visuals and addictive chants of #DhakDhakGoal commanded the attention of the viewers.

Aired on TV and uploaded to their Facebook and Youtube channel, the melody was on everyone’s lips. The outdoor branding for the campaign by Peek Freans Chocolicious painted the entire City of Lights blue, creating a strong recall amongst the target audience.

The outcome of the marketing stunt has been spectacular, generating unique engagement with football aficionados.

From Lyari to Russia

Lyari, also known as ‘Little Brazil’ for its football fever, is a whole new town within Karachi, which has produced some of the finest talents the world of sports has seen.

It is indeed a moment of marketing brilliance when Yeh Hai Meri Game made them go FIFA-crazy and united them under the slogan of #DhakDhakGoal.

Honoring the still untapped potential that dwells in the town, the brand conducted football match screenings, where Lyari boys were spotted having a blast at showcasing their freestyle football skills.

It also came as no surprise when the campaign crossed borders and made its way across the borders to the host country for FIFA World Cup 2018: Russia!

The priceless expressions of the foreigners chanting #DhakDhakGoal was truly a sight to behold. Consequently, it became a great way to celebrate Pakistan’s passion for football.

Whoa whoa whoa‼ this is real outreach! #DhakDhakGoal goes beyond borders all the way to Russia and becomes the voice of football fanatics 🙌 #ZorSeBol ⚽#YehHaiMeriGame #PeekFreansChocolicious @peekfreans_chocolicious

#DhakDhakGoal proved to be one of the inspired mantras that won the internet. The campaign went viral on all digital platforms and created influential social media conversations.

The tune became an overnight sensation, breaking records by reaping 2 million views in 24 hours and 10 million views in just 1 week! The views continue to sky-rocket till date. Clearly, the passionate track evoked a strong reaction in Pakistanis which helped it get there.

On Twitter, the brand secured thousands of tweets and #DhakDhal goal trended for days, making inroads for the youth who could one day represent Pakistan’s football team.

Taking it to Snapchat, millennials eagerly uploaded selfies with the #DhakDhakGoal filter to show their love for the sport! 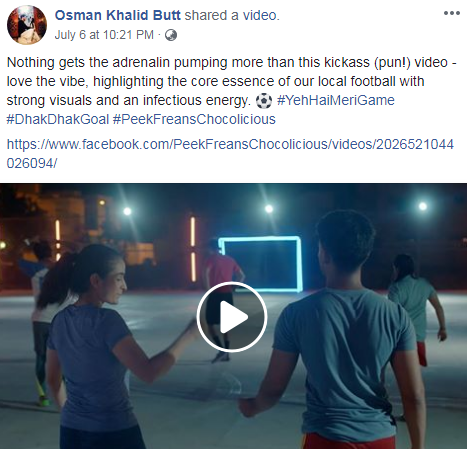 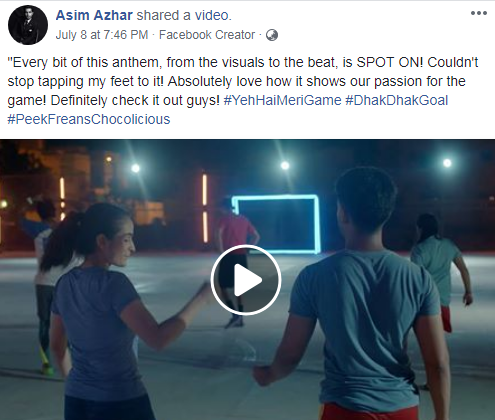 – What a wonderful anthem! #DhakDhakGoal shows true spirit of football in Pakistan and how Pakistani women have made it to all walks of life. 🤜🏼 • Happy to see how viral the anthem has gone💃🏽 • #ZenithIrfan #MotorcycleGirl #GirlPower #DhakDhakGoal ⚽#PeekFreansChocolicious #YehHaiMeriGame #PaidPost #Paid 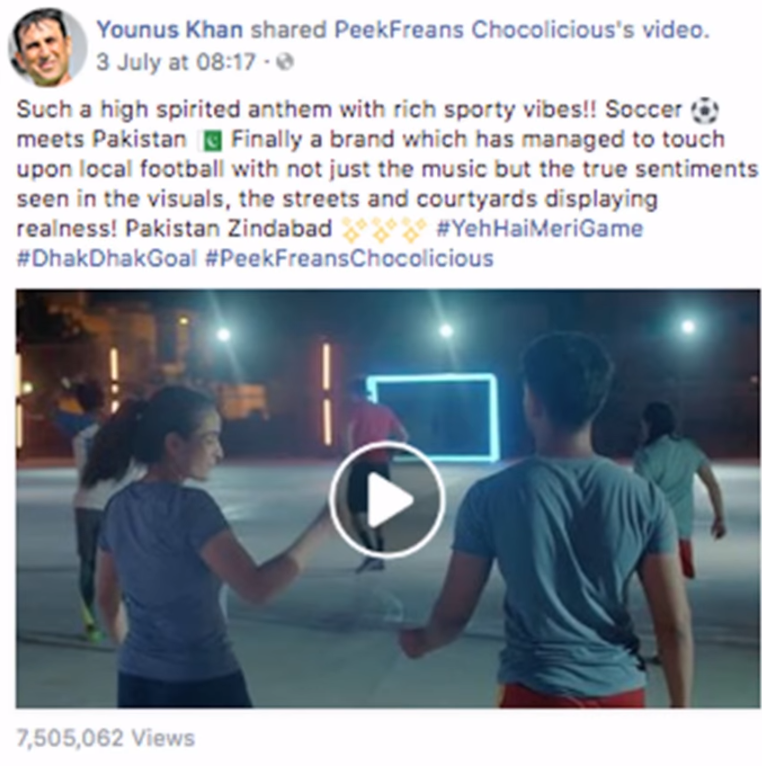 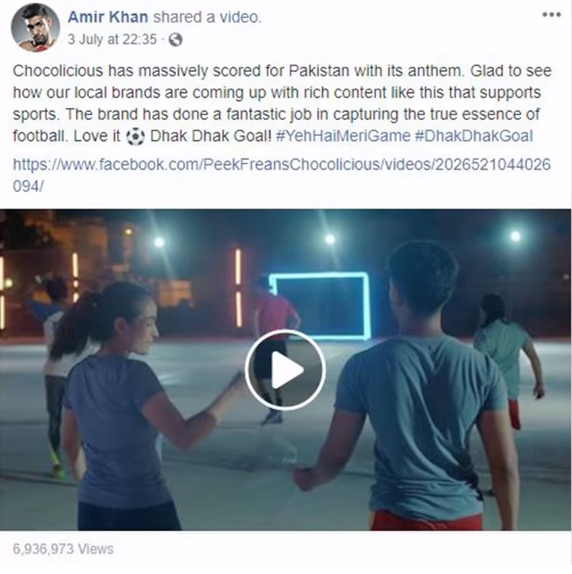 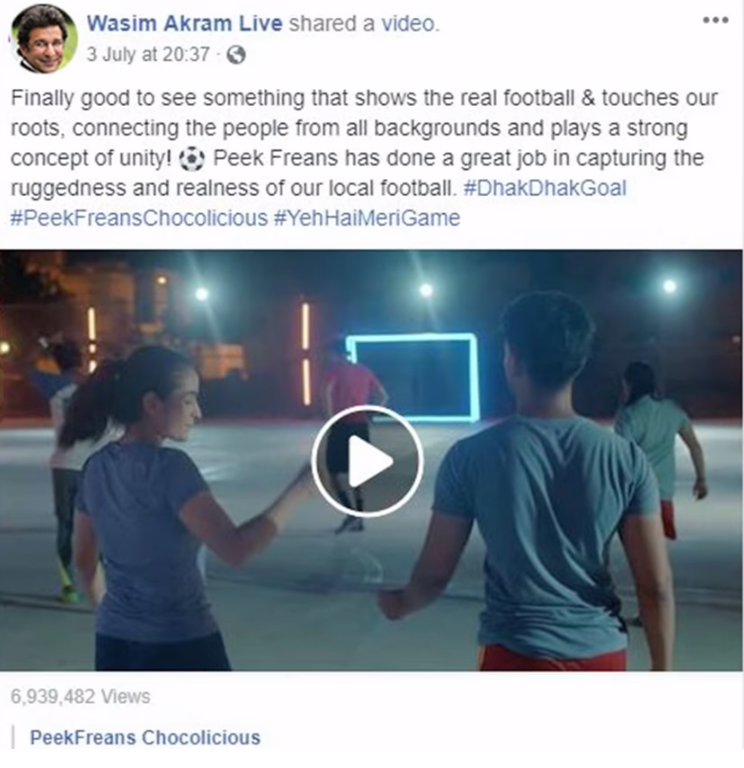 A relatively young brand, Peek Freans Chocolicious has surely amplified the affinity and loyalty it has with its target market. A passionate piece of marketing, the campaign had a sprawling presence on all promotional platforms.

#DhakDhakGoal was masterful strategizing. Even though FIFA has ended, Yeh Hai Meri Game is still being recalled on social media, all thanks to the memorable anthem, which clearly had the ability to capture the hearts and minds of football fans.

All in all, the marketing inventiveness of Peek Freans Chocolicious, the skillful cinematography of the anthem and its inspirational message truly deserves an applause.