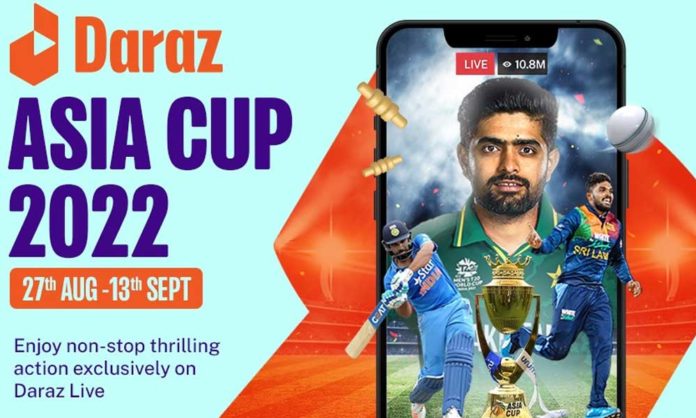 As the Cricketing season is approaching quickly, the whole nation is eagerly anticipating the clash of the year, Pakistan v India on 28th August 2022, as the two teams go head to head in the group stages of Asia Cup 2022.

Daraz App, historically, has been the favourite destination for all Pakistani cricket lovers to stream cricket. ICC WC T20 fixture of India v Pakistan saw the highest concurrent viewers of 2.7 million, ever recorded on a Pakistani streaming platform, and the World Cup as a whole saw a total of 346 million viewers.

Cricket viewers and viewership, in general, have seen a major change in behaviour with most of the audience preferring to watch cricket online and giving the traditional mass-marketing TV Channels major competition. This new trend was due to the scheduling of matches at times when most people are commuting from work and have easy access to mobile phones rather than TV as well as power outages and load-shedding, in Pakistan, which stops them from viewing their favourite sport on TV via cable or satellite. As a result of this, we see an uplift in viewers logging in on Daraz to watch the men in green battle it out on the field.

Asia Cup 2022 will commence on the 27th of August, featuring 13 matches. Super 4 round will begin on 3rd September 2022, while the Final will take place on 11th September. Users can watch all the matches of the tournament through the Daraz App from anywhere in Pakistan without missing any moment of the tournament.