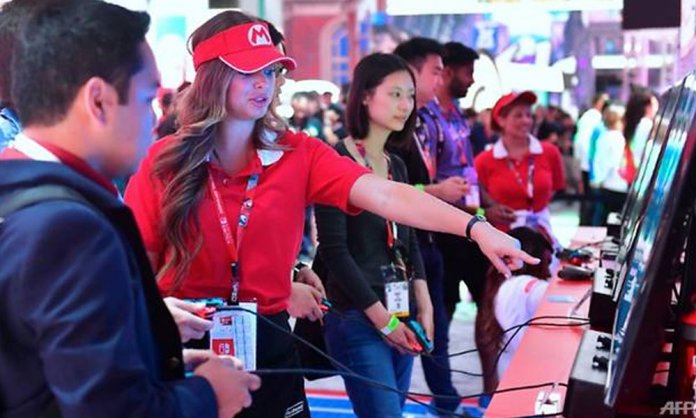 Console makers long at the center of the video game universe are adapting to an exploding constellation of ways to play, with the cloud looming on the horizon.

But the premier industry gathering was very much focused on games themselves, and the idea they can be played as a service hosted in the internet cloud using an array of devices from smartphones to personal computers.

The annual E3 event “occurs against a backdrop of disruption in the console market,” according to IHS Markit games technology research director Piers Harding-Rolls.

“As the market becomes more digitally enabled and service based, console companies and publishers are starting to map out their longer-term strategies including the building out of subscription cloud gaming services,” Harding-Rolls told AFP.

Companies interested in cloud gaming see it as a way to reach broader audiences, adding to console businesses instead of taking away from them, according to the analyst.

“I see consoles being around or the foreseeable future,” Harding-Rolls said.

But the competitive landscape will tilt away from console-market leading PlayStation to terrain more favorable to Xbox, he reasoned.

Microsoft has built a powerful platform for hosting computing in the internet cloud, making such service a thriving part of its business.

“We commit and harness the full breadth of our resources at Microsoft to deliver on the future of play,” Xbox team leader Phil Spencer said at an E3 briefing.

Spencer also said that Microsoft is working on a cloud service for streaming console-quality games to internet-linked devices.

“If you agree that the eventual future of games consumption is through cloud gaming services, then those companies with a strong position in cloud are likely to be best placed to benefit from the transition,” Harding-Rolls said.

“In this context, Microsoft’s cloud division gives the company a natural advantage when trying to build a profitable business.”

Sony and Microsoft have each put out word they are working on next-generation consoles, but planned capabilities have yet to be revealed.

But if the video game world shifts to Microsoft’s strengths, its new competition in play could become the cloud and AI titans such as Amazon, Google, Tencent, and Alibaba, according to Harding-Rolls.

The video game industry is seeing its biggest investment ever, with the three big consoles “very healthy,” according to Electronic Software Association chief executive Michael Gallagher.

The ESA trade group organizes E3, with 60,000 industry insiders and gamers from some 100 countries expected to attend the three-day gathering.

Console makers have been taking lessons from mobile games, building online communities of players who provide feedback; stream play; subscribe to services, and spend money on digital content such as dance moves or funky clothing for characters.

“Mobile has been a fantastic growth point for the industry,” Gallagher said.

Console video game titan Bethesda is unabashedly bridging the divide between console and mobile play with versions of blockbusters “Fallout” and Elder Scrolls” for play on smartphones or tablets.

“I can’t wait to play it,” Gallagher said of “Elder Scrolls: Blades” that will be available free for iPhones or Android-powered mobile devices when it is released later this year.

Another sign of console-quality play making its way to mobile devices came in the form of telecom giant AT&T showing off ultra high-speed 5G wireless data capabilities on the E3 show floor.