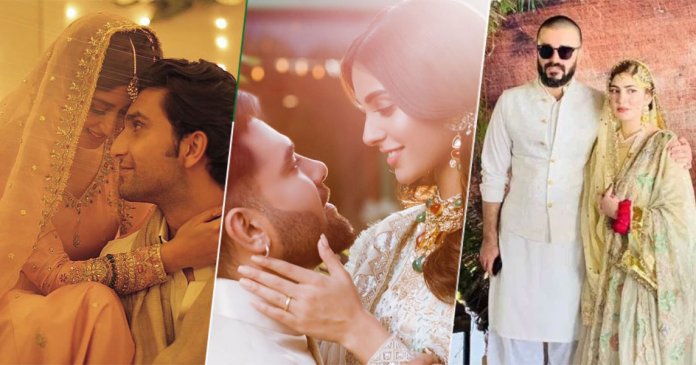 Some couples welcomed bundles of joy this year, couples that called it quits, and new couples that no one saw coming. For some stars, 2019 is marked by another milestone – settling down.

We listed down the couples who decided to settle down with each other this year and live their fairy-tale happily ever after!

There is no denying that Hamza Ali Abbasi and Naimal Khawar have become everyone’s favorite couple since they tied the knot, and people are lately obsessing over them.

Hamza Ali Abbasi tied the knot with artist Naimal Khawar Khan on August 25th and the couple’s reception was held on August 26th in a simple yet elegant nikkah ceremony.

Photographer Maha Wajahat Khan shared many moments from the happy occasion that were heartwarming.

After their wedding, the two soared across Spain and Paris, every single picture turned heads and went viral on social media.

The couple is always seen sharing beautiful moments together and people could not help but respond with hashtag #couplegoals. We wish them both the best in the future and oh they’ll have such cute babies!

Yasir Hussain proposed to Iqra Aziz in a very public way. At the 18th edition of the Lux Style Awards on Sunday, Hussain went down on one knee and popped the question to his long-time girlfriend, Iqra.

While on-air or public proposals might not be everyone’s cup of tea, you can’t deny that a celebration of love hits you right in the feels!

Furthermore, in her latest Instagram post, the 21-year-old Suno Chanda actor shared an endearing photo of herself with her beau Yasir Hussain accompanied with a heartfelt caption. “I’ve never met a man as supportive as you my love,” she said.

I’ve never met a man as supportive as you my love🌸 Counting days till we become official♥️ . 📸 @moe_butt

The couple also took a trip to the US in October. They also visited Universal Studios in Orlando. The duo kept their fans updated by posting holiday snaps regularly on their social media.

Their magical vacation to Disneyland was also just another reason for the loving fans to be over the moon!

You can’t fake this kind of chemistry, folks. While some actors pretend to be in love with their TV partners, this lucky couple had the chance to share romantic screen time with each other.

Here's to new beginnings. Today we are happy to announce that with the blessings of our families we are officially engaged. Our special day will be even more special with the love and prayers of our family, friends and fans. Ahad & Sajal

The onscreen chemistry for the Yakeen Ka Safar duo has transformed into an offscreen romance and we couldn’t be happier for this power couple.

The couple is currently working on their ongoing project Yeh Dil Mera which is a romantic thriller and while there is still a lot there that is confusing, we can only wait for the more episodes to come to a conclusion!

Sania Shamshad is among those Pakistani actresses who began their career as a TV show host and then with time moved ahead with acting. She recently tied the knot with Hidayat Syed and looked like a queen on her big day.

-July 24th 2019 The day I got tied in a knot with this man. Untill a few months back, I didn't know I'll be blessed with someone like him. I have never felt so safe, so loved, so owned, and so happy. I am lucky to have him in my life. He showed me what integrity actually means, he showed me what love really is, he showed me what happiness can do to you. I am grateful to have him in my life, and I hope n pray that we stay together through every thick and thin of life. Here's to us, here's to our journey and here's to our love. Forever yours. Make up and hair: @hifsa.khan.salon Wardrobe: @samsaracouturehouse Jewellery: @samreenvance Event by: @uzman_events Photography: @mehars_studio @zaibalviphotography @ssphotography_official

A post shared by Saniya shamshad hussain (@saniyashamshadhussain) on Aug 2, 2019 at 1:54am PDT

At her reception, Shamshad looked like she’s walked out of a fairy-tale movie and the glow on her face couldn’t go unnoticed.

-July 25th 2019 And our journey began. I never thought that you would shower your love on me so much that it'd sweep me off my feet. I am so ready to invest all my faith in you, I am so ready to be by your side every step you take. You have made me feel like my life has become a fairy-tale. You're just the right person for me, you're just the right man any woman can ever think of. And you have all my love and gratitude for being a wonderful person that you are.

A post shared by Saniya shamshad hussain (@saniyashamshadhussain) on Aug 4, 2019 at 3:36am PDT

Shamshad is currently working on drama serial Rishtay Biktay Hain which has garnered popularity amongst the masses.

The Jab Tak Ishq Nahi Hota actress was a beautiful bride and her wedding came off as a surprise for the masses.

Pakistani model turned actor Iman Ali tied the knot with Babar Bhatti on the 21st of February 2019 in Lahore. The couple together looked like a vision and the masses simply loved the constant social media updates of the wedding.

The model’s mehndi and nikkah ceremonies were held together and photos of the event took the social media by storm. Iman Ali was an epitome of grace and the stunning bride had a ball at her event with her sisters and friends.

The pair had their reception after a couple of days and the duo looked stylish and classy at their big day.

The Pakistani model tied the knot with Zahid Noon and the couple looked adorable together. Despite the current trend of grand weddings, Amna Baber decided to keep her wedding a private affair.

Love,laughter and happily ever after. 👰🏻🤵#Married

This model had a quiet ceremony where she donned a light neutral dress for the nikkah with a green dupatta. Amna topped that off with gold jewelry to go with her popping highlighter, while Zahid Noon kept it classic with a white shalwar kameez and black blazer.

Hasan Ali and Samiya Arzoo tied the knot in Dubai and it was truly a royal affair! The bride was spotted in a traditional red lehenga while Hasan donned a crimson turban and a designer black sherwani.

Thanks to everyone for your wishes on this auspicious occasion which is very close to my heart. May Allah bless all the people who have shown love and support to us. Keep us in your prayers. #HassanWedsSamiya

Ali is the fourth Pakistani cricketer to marry an Indian girl. While the bride has Indian roots and works as a flight engineer for Emirates Airlines in Dubai, Hasan’s home is in Sialkot.

All eyes were on them at the Nikkah ceremony:

In a press conference, Ali was asked about where he’d settle post marriage; he made it clear that he would continue living in his hometown of Gujranwala.

Imad Wasim’s Nikkah ceremony with Saniya Ashfaq was held at the Faisal Mosque in Islamabad. It was a simple ceremony with just family.

Thank you everyone who came tonight, much appreciated…had a really great time this evening … #newbeginning ❤️

Imad Wasim’s valima function was held in Islamabad. Imad was dressed in dusk gold sherwani while his wife donned a red and gold dress.

The couple looked stunning and the wedding was a grand affair.

Xeeshan had a beautiful reception in Islamabad as he tied the knot with journalist Myrah Khan and it was evident that the newly-weds had a ball at their wedding!

Just look at them stealing our hearts!

Based on all the pictures of the event flooding social media, the designer went all out with tradition. Especially with his sherwani, turban and all. Meanwhile, his wife Myra donned a blush pink and gold ensemble.

Producer Imran Raza Kazmi Got Married to Sadia just recently and we’re over the moon! The DOP looked amazing at the event. Some of his renowned work includes movies like Janaan, Heer Maan Ja and Parchi.

Though the event was low-key, the producer’s close friends and stars Hareem Farooq, Osman Khalid Butt, and Ali Rehman Khan were in attendance. Although, from the pictures and videos, it appears that they had a blast.

We wish all of the above couples the happiest life ahead. Which is your fav couple? Lets us know!