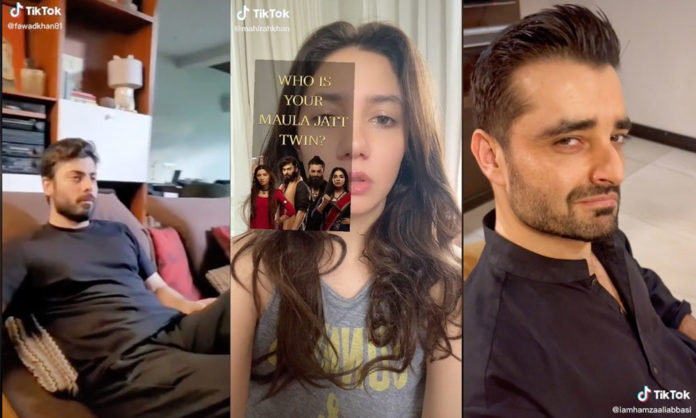 The trailer of the most anticipated film of the year, Maula Jatt, has finally been unveiled, and film lovers cannot wait to watch the epic battle of Maula and Noori on the theatre screens. As the fans eagerly wait for the theatrical release, the star cast of Maula Jatt has joined TikTok to share all the insights about the film and interact with them.

The Maula of the classic clash, Fawad Khan, joined one of the most popular video platforms by sharing the official release announcement of the film. The heartthrob hero who holds an image of a romantic prince has announced his transition into an action giant on his TikTok account.

What makes a protagonist great is an antagonist that equally matches his strength. Hamza Ali Abbasi as Noori is set to blaze the screens and made his entry to TikTok with a silent warning for the Maula.

Glamour queens Mahira Khan and Humaima Malick have also arrived on the platform. Fans have wasted no time in following the Lollywood queens on their TikTok accounts, who’ll portray the character of Mukkho and Daro.

The powerful supporting cast of Maula Jatt has also launched their TikTok accounts to share all the powerpack moments of the most awaited movie. Farish Shafi as Mooda, rock star Ali Azmat are welcomed by fans on the most loved video platform. Mirza Gohar Rasheed as Maakha, is ready to portray a fierce character but didn’t shy away to share fun moments with Ukhano on the release of the film’s trailer.

A series of special effects, features and challenges are also released on TikTok so the fan base can connect with the cast and show their love and enthusiasm for the film. They will also find an exclusive account with the title “The Legend of Maula Jatt” to access more exciting content. The remake of the 1979 movie with the same title is directed by Bilal Lashari.

Maula Jatt will release across Pakistan on October 13, 2022.