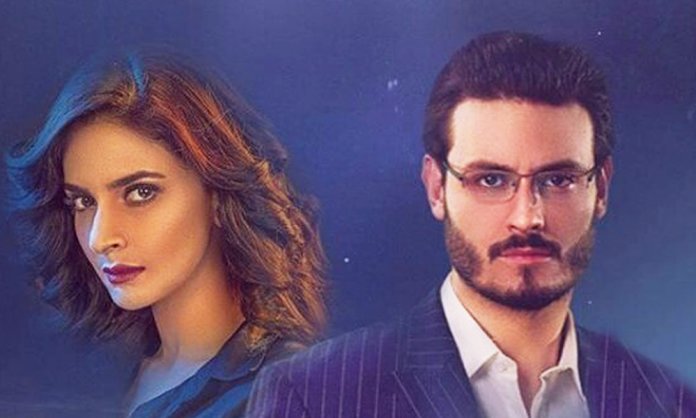 When all good things come to an end, the world bemoans!

Last night, the final episode of Urdu1’s stellar drama ‘Baaghi’ aired in all its glory. From Saba Qamar’s passionate performance as Fauzia, Osman Khalid Butt’s generous and loving character, Khalid Malik’s different yet strong role; this drama has locked itself in a safe place in every viewer’s heart.

Where on one hand, the star-studded cast kept us hooked to the tale, on the other hand, the biography of Qandeel Baloch unveiled the unseen side of her; how she transformed herself for fame, and money to become a strong-headed woman of substance.

Before Baaghi, people who used to think negative about Qandeel, today, stands in favor of the girl who in her personal life stood for women empowerment. Unfortunately, she was killed in the name of honor by her very own blood.

As Baaghi came to an end, OKB couldn’t hold back his tears.

Do not watch this if you haven't seen the last episode of Baaghi. I was sharing live reactions with friends as I watched and – I was not prepared. Baaghi broke my heart. And this part was like a punch to the gut. Still reeling.

Nimra Khan too posted a heartfelt note about her journey in Baaghi!

Thank you for loving my character #Munni in #Baaghi Most importantly, thank you so much @sabaqamarzaman for supporting me, i still remember your warm hug when we were about to take our first scene, which ignited me to do well. Your words 'i know, you will do the best' was soo encouraging. To you my fans, thank you for always being there and loving whatever i do, including Baaghi. #Baaghi #NimraKhan #Urdu1 @baaghi_official @ninakashif @urdu1tv P.S- Never judge a Woman by her work and do not presume her by her actions, you can never understand what it takes to be someone whom you dreamt to be.

These amazing lines by Sabar Qamar at the end of the amazing drama will always be remembered by the viewers.

It puts us all into the thought that whatever happened with Qandeel, was it all correct?

The Audience Also Could Not Hold Back Their Tears!

I was not able to understand why was I crying.After all that was just a fictional story.But that was not only a story that was story of our society in which we are living.Where men are given free hand to kill their sisters,daughters and wives in the name of fake respect.#baaghi

Here was a woman; she could have been anyone of us, a woman with dreams in her eyes. Her fault was to continue flying with her hopes when the world tried to shoot them down.Her flaw was to trust the people around her,even when they had done nothing to deserve that trust. #Baaghi

It was absolutely amazing… Saba Qamar nailed her role ! And that line at the end “Hogaya theek apka Muashra?” 😞😐 #Baaghi https://t.co/WBcKnw9vAu

absolutely gut-wrenching, heartbreaking series. i’d be lying if i said i hadn’t shed a few tears; 10/10 would watch all over again. #Baaghi

Now when you see the comments and responses, you see things like

"Aise bhaaion pe laanat" instead of "Qandeel pe laanat". You see more of "kia gunaah tha iska" instead of "meri behen hoti toh mai bhi maar deta". You see a change. And that is a good aftermath of #Baaghi.

Even People From India Applauded The Show!

This Post By a Fan Exactly Summarizes What Baaghi Taught Us!

A post shared by HiraHyderScribbles📝 (@hirahyderscribbles) on Feb 1, 2018 at 7:07pm PST

The end of Baaghi leaves us with many questions. Doesn’t a person, who wants to improvise herself/himself, deserve a second chance?

Is “honor-protection” only applicable for girls? Did killing a “bad woman” end the problem itself? Did Qandeel really deserve it?

All these questions do have an answer. Do ponder upon these for once.

What are your views on this ground-breaking drama? Let us know in the comments below.