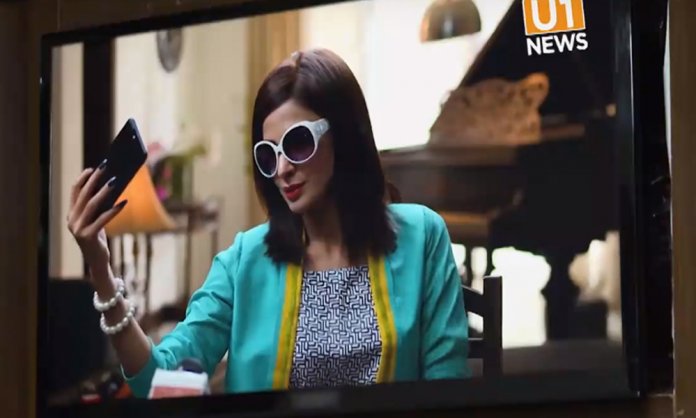 Urdu1’s ground-breaking drama, Baaghi is continuing to reach new heights with its

Kanwal, played by the striking Saba Qamar, has now started to take over the world of glamor, reaping a huge fan base and attaining sympathy of many people.

In this episode, we witnessed how media agencies and channels took advantage of her just for the rating game, and how they edited her clips for their own benefit.

The episode opened to Abid being shocked when he sees Fauzia giving the singing audition. Of course, he was skeptic about the fact that his ex-wife was wearing western clothes and couldn’t believe that she could even speak fluent English.

Meanwhile, Kanwal receives a call from her home where her sister tells her that her family saw the audition clippings and could not believe if it was Fauzia or not. She also said:

Guilt-stricken, Kanwal lied to her by saying that it wasn’t her and must be someone else.

Gohar also wants Kanwal to go to Dubai for a client. He encourages her to seize the offer by saying that she will earn a lot of money for herself. But our heroine is now hesitant to grab the proposal after her the conversation with her sister.

What is more, a famous news channel contacts the emerging superstar and wants to take her interview.

Unfortunately, Kanwal had no clue what was coming for her, and she agreed to it. When the TV anchors came in for her interview, they were in aghast with her straightforward behavior.

Consequently, they took a dig at her,  insulting her indirectly, which pushed the hot-headed social media star to kick the team out of her room.

On the other side, Fauzia’s family problems have touched the sky. The family is drowning in the pool of debts, Munna is indulging in bad activities and has stopped going to school as the family was unable to pay his fee. The family then decides to wave off their debts from the money Fauzia has sent.

The drama takes an interesting turn when Salman, who defamed Kanwal, is now ready to support her as he thinks whatever is happening to her is wrong.

He airs a video in which he supports the poor lady, and gives the judges a time of 2 days in which they should apologize to Kanwal, otherwise, as he said, “ye jung ap ki aur meri shiru ho jaye gi”.

The episode closed to a deep conversation between Shehryaar and Kanwal at a restaurant at 3 in the morning, when Kanwal is trying to make up her mind on “Izzat aur paisay”.

Shehryaar, all upset, pours his heart out in front of Kanwal and shares his sadness with her. He tells her that it was the day when his wife and child passed away in a tragic incident. The episode ended on Kanwal being all shocked and jaw-dropped by listening to this statement of Shehriyar.

Saba and OKB have made the drama even more captivating with their presence. Their stellar performances are adding the zeal to the tale and we wonder what is next to come in the story.