Home Technology Gadget Android vs iPhone : Which One To Buy In 2023?
Advertisement 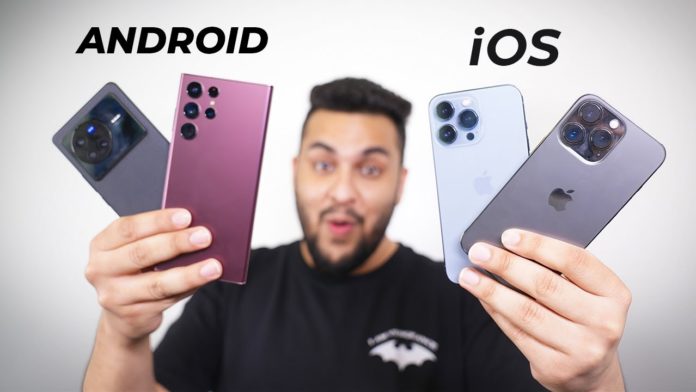 The two most widely used smartphone operating systems are Android and the iPhone running iOS. Both have distinctive qualities and skills of their own, making the choice between the two challenging for many individuals. In order to help you choose which platform is best for you in 2023, in this post we will evaluate Android and iOS in terms of their user interfaces, app selection, performance, and security.

The user interface of Android and iPhone is one of their most obvious distinctions. With possibilities to modify the home screen, app icons, and general theme, Android smartphones have a more configurable interface. The iPhone, on the other hand, offers a less customizable, more unified UI.

The selection of apps is another thing to think about while deciding between Android and iOS. There are many apps accessible on both platforms, but there are certain distinctions to take into account.

Overall, there are more applications available for Android, including more free ones. However, certain well-known apps, such as some games, and music streaming apps, could debut on the iPhone first. Additionally, iOS’s app store is more carefully regulated, requiring all applications to pass scrutiny before being approved for distribution. Overall app quality may improve as a consequence of this, but it may also prolong the time it takes for new apps to be made accessible on the market.

Any smartphone user should be concerned about security, and both Android and iPhone have their own safeguards in place to secure user information.

Due to their open design, Android smartphones are often thought to be less secure than iPhones. Because Android users may install applications from sources other than the Google Play Store, there is a higher chance that malicious apps will be downloaded. In order to overcome this problem, Android has improved recently. Including the launch of Google Play Protect, which checks applications for viruses before downloading them.

On the other hand, the ecosystem for iPhone devices is more restricted because all applications must be approved by Apple before they can be downloaded. This aids in lowering the likelihood of installing fraudulent programs, but it may also diminish the platform’s versatility.

Both Android and iPhone have their own advantages and disadvantages in terms of performance. Android smartphones often have higher RAM and processing power. This may enable individuals to work more quickly and effectively on several projects at once. However, this may also result in Android smartphones’ batteries lasting less time than iPhones.

Processing power and RAM are often lower in iPhone devices. However, they usually use resources more effectively. Longer battery life may come from this, but it may also make iPhones slower at managing numerous activities or running resource-demanding applications.

To sum up, both Android and iPhone offer distinctive features and functionalities that appeal to a variety of people. Android has more apps available and a more customized UI. But it could have a lesser battery life and be less secure. The iPhone’s UI is more consistent, and its app store is more organized. However, it could be less capable in terms of processing speed and app choices. In the end, your preferences and needs will determine whether you choose an iPhone or an Android.