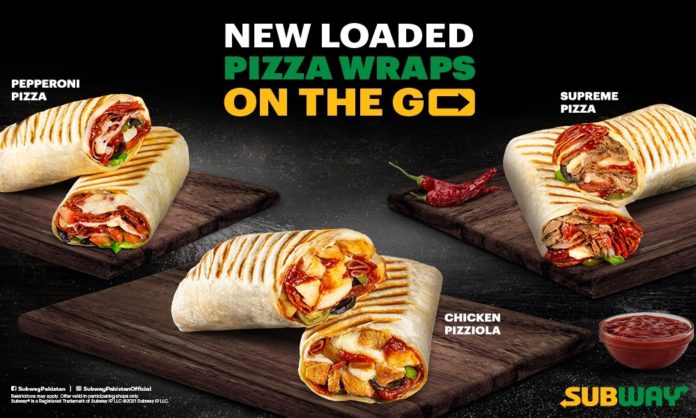 Are you ready to roll?

Subway’s Loaded Pizza Wraps has everyone bursting with excitement as we enjoy Pizza in a mouthwatering, mind-blowing wrap!

Subway offers a variety of pizza toppings in the form of three distinct flavors; offered in classic pepperoni, Chicken, and Beef options.

Each flavor has its own distinct fillings to cater to the diverse taste buds of the customer and is available from Rs. 650.

So far the Loaded Pizza Wrap has received celebrated enthusiasm and reviews from customers and influencers alike including high praise for the convenience and satisfaction of fuelling your body on the Go!

Alishba Chapsi @outandaboutwithchapsi remarked on how the Loaded Pizza Wrap is ideal for eating while working as it leaves no drip or mess.
Ali Gul Pir broke out a fresh, hot rap on how it’s the No.1 meal on the Go! Which is easy to eat and packed with more meat and more flavor than ever!

The Loaded Pizza Wrap was designed with the idea that wholesome cravings should never be ignored even on the go, nor when you just don’t have both hands for that slice of pizza, this culinary curio lets you move about while sustaining yourself with double the meat and double the flavor in every bite.

So far the Loaded Pizza Wrap has received celebrated enthusiasm and reviews included mostly praise for the convenience and satisfaction of fueling your body on the Go!

So, what are you waiting for? Order your favorite Pizza with a twist only at Subway.