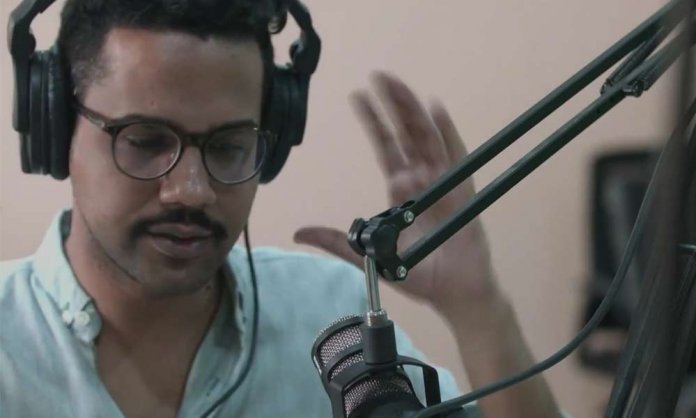 It is true that a patriarchal society like ours not only oppresses women and their voices, but also puts men on such high a pedestal of strength and honor that they start believing anything that has to do with emotions depicts weakness and vulnerability.

Isn’t it only human to be vulnerable and weak? Who can be strong all the time?

So when we see a man (even better, TWO men), we like to talk about it and appreciate it.

Men are now beginning to open up about their emotional experiences, and it is actually refreshing to see them breaking the “men don’t cry” and “Mard ko dard nahi hota” stereotypes.

Recently, Ali Gul Pir aka our very own Waderay ka Beta, was invited to a podcast interview by comedian/writer Shehzad Ghias.

The interview was unconventional, honest, and unexpectedly emotional.

Shehzad touched upon sensitive topics that Pakistanis usually like to attach stigmas with, and Ali responded to the questions with genuine frankness.

Subjects like harassment, domestic violence, divorce, feminism, liberalism were discussed. And the ease and sensitivity that they were discussed with while maintaining a lighthearted atmosphere is simply remarkable!

Ali opened up on the notice that Ali Zafar got sent to him from the FIA, and he maintained the following stance throughout the conversation.

“I didn’t do anything that was legally wrong;  I called him an alleged harasser in an opinionated tweet and I will not apologize for it as they want me to”

Ali also opened up on the domestic abuse he witnessed his mother face for years, and gave a very strong statement on abuse which all of us should register in our minds, especially when we marry our daughters off:

“Mental abuse is also abuse. The law recognizes it as abuse.”

Ali then spoke about his own divorce, and the pain that is experienced when we let go of a very dear relationship. With a lot of humor he managed to express a lot of pain, and we guess only a comedian is able to pull that off.

All in all, it is extremely wholesome to see two men publicly having a heart-to-heart without letting toxic masculinity cloud their conversation.

We hope that more men are able to follow suit in the future without the fear of judgement. We repeat, patriarchy damages all genders, and conversations like these are truly helping men break out of the standards that society expects from each gender.