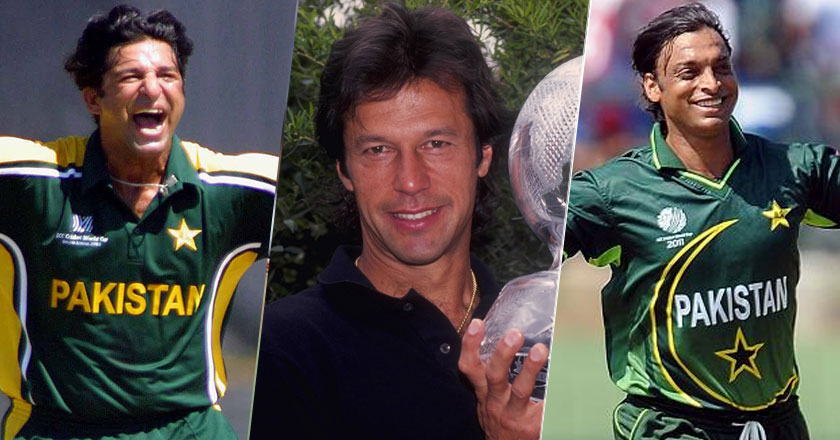 Cricket runs in the blood of Pakistanis, not to forget how this soil is blessed with champions of this sport. The country has produced some fine sportsmen-turned-into-legendry cricketers who have shown their class in the cricket field and made their countrymen proud.

The following are  seven Pakistani cricket legends who were masters of this game and have had great achievements:

When you think of Pakistan’s glorious journey in cricket, the first name to strike in your mind is most probably the one-man-army, Imran Khan. The whole world adores him as the greatest captain cricket anyone has ever seen. With an unmatched class, this cricket genius led his side to miraculous wins against top oppositions of then. His ‘cornered-tiger approach’ instilled a belief in the team that made Pakistan World Champions in 1992, the biggest achievement of his career. The legend was Pakistan’s finest cricketer and the best all-rounder of that time with aggressive fast bowling and stylish batting.  In his 21-years cricketing era (1971-1992), Khan transformed Pakistan cricket and every single cricketer of the country today idealizes him.

Wasim Akram was undoubtedly the greatest fast bowler of all time who mastered the art of swing and seam bowling. The ‘King of Swing’ is the only bowler to have four international hat-tricks to his name, twice in ODIs and tests. He was the first bowler to reach 500 wickets mark in ODIs and won many games for Pakistan with his all-round performance. No one can forget his two successive super-magical deliveries in the 1992 WC Final, which turned the match in Pakistan’s favor. These two balls rated as Millennium Best Balls in the cricket history. The all-rounder also led Pakistan in two world cups during his 18 years (1985-2003) international career.

Javed Miandad was, arguably, the classiest batsman Pakistan has ever produced possessing solid batting technique and steely nerves. Known for his cut shots and athletic running between the wickets, it was Miandad who introduced reverse sweep shot first. No batsman could have been a better finisher than great Javed Miandad in limited over games. His last ball winning six to Chetan Sharma at Sharjah is one of the classic moments of cricket history ever. He was the only Pakistani cricketer and second in the world who played six world cup tournaments (1975-1996). The legend is more like a whole cricket academy by himself for youngsters in Pakistan.

The toe crusher, Waqar Younis, was known best for his deadly in-swinging yorkers. At his peak time, he was impossible to play against as he was known for his fiery pace and swing that troubled the batsmen. His ability of reverse swing delivered with accuracy made him a terrifying fast bowler clocking a speed of above 150km/h. It was always a wonderful sight to see him surging his run-up and breaking the stumps of great batsmen. One of fastest ever, Waqar paired up with Wasim in 2Ws, won numerous matches for Pakistan by his magical spells. Waqar aka ‘Burewala Express’ also led Pakistan team in World Cup 2003 in his 14-years career (1989-2003).

Inzamam-ul-Haq was an iconic batsman for Pakistan and his presence at crease always kept the chances of winning alive. He emerged as a star when he stole the victory from New Zealand in 1992 World Cup semi-final. When it comes to batting in critical situations and taking responsibility, Inzy was best in the business by keeping his head cool. His mentor Imran Khan rated him as the best batsman in the world against any pace attack. Inzamam also has the honor of scoring a triple century in tests (329 runs), the second-highest test score by a Pakistani. The consistency in his batting increased after he was rewarded captaincy and he shaped inexperienced, young team into a fighting unit.

With his sheer pace and nasty deliveries, world’s fastest bowler Shoaib Akhtar defied all the great batsmen of his time. Having lightning fast speed around 160km/h, facing ‘Rawalpindi Express’ was like a nightmare for all batsmen who were on top. The cricket has witnessed some terrific spells of fast bowling by Shoaib Akhtar that were completely unplayable. Many times, his couple of overs turned the whole match in Pakistan’s favor. Even legends like Sachin Tendulkar and others admitted that they did fear Akhtar and their legs shivered at the crease. The two successive balls to cleaned up Rahul Dravid and Sachin Tendulkar at Eden Gardens shaped up his career. However, he bowled the fastest ball of the cricket history at 161.3km/h in World Cup 2003.

Saeed Anwar was the most stylish opener Pakistan has ever had. His natural stroke making with majestic timing and placement were always a treat to watch. The wristy batsman was a real class-act who used to bat with elegance at ease to dominate the opposition. Anwar was known for reading the bowler’s length early and was very strong on his legs. When there is his day, he seemed to be unstoppable with aggression against spinners and medium pacers particularly. He scored 20 magnificent ODI centuries, most by any Pakistani batsman so far. For years, he held the record of highest ODI score by an incredible innings of 194 runs against India in 1997.