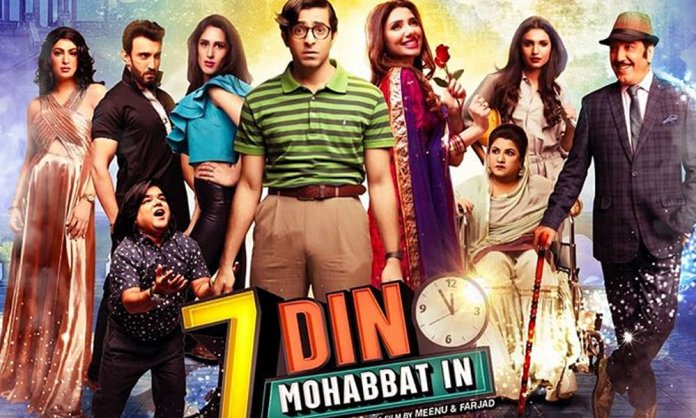 This Eid season will bring a film to you that has comedy but isn’t directed by Nadeem Baig; has an excellent script but isn’t penned by Khalil ur Rehman Qamar; has actors playing characters but isn’t from the camp of Nabeel – Fizza; this film is 7 Din Mohabbat In.

It comes out as a feel-good film that might have a predictable plot, but it keeps the audience engaged through all the ingredients of a blockbuster.

Let’s look at these 7 ingredients that helped in making 7 Din Mohabbat In stand out from other Eid releases.

The Guys – Tipu and Tingu Master

You had seen him in Ho Mann Jahaan and on many TV programs but Sheheryar Munawwar rediscovers himself as Tipu in 7DMI.

His character literally goes from a zero to a hero; from a wannabe into a lady-killer. How he manages to do that is reserved only for those who will watch the film, however, I can tell you that for once, actors like Hrithik Roshan will wish they had done the role.

Sherry’s transformation from the slow guy next door to the man who saves damsels in distress for fun is the kind of character development we miss in our films.

As for his sidekick Danish Maqsood, he was too good in the capacity of Man Friday. Although he hasn’t been part of such a film before, he has the best lines in the film that will stick to your mind even after curtains.

The odd couple reminds you of the golden days of Pakistani cinema when Mohammad Ali and Lehri used to scout for girls with the latter getting hit; or when Waheed Murad and Rangeela used to play smart in front of ladies before their act was discovered.

This Eid season, 7DMI brings to you not one or two but 3 leading ladies Neeli, Ghazala and Princess Sonu and an item girl played by transgender Rimal Ali.

While Mahira Khan’s Neeli is soft-spoken and addicted to TV and digests, Amna Ilyas’ Ghazala is the go-to person whenever there is boy trouble.

And then there is Mira Sethi’s Princess Sonu who comes in as a breath of fresh air and gives Tipu a chance to become a hero.

All three have done a fabulous job and have stayed in their characters which is the plus point of the whole film.

Mahira looks the part of a girl in love while Amna steals the show as beauty with the brains; Mira doesn’t have many scenes but whenever she delivers a dialogue in her English Punjabi, it brings a smile on the audience’s face.

The Baddies – Kankatta and Amma

Aamir Qureshi’s Naseer Kankatta and Hina Dilpazeer’s Amma are the bad guys here because they don’t want two lovers to be together. Kankatta’s mannerisms will remind you of those bullies who have achieved nothing in life but always get things by force; Amma is one of those elderlies who are always angry for no reason.

Both of them are convincing in their characters although Hina Dilpazeer needs to get out her Momo phase for some time to deliver even better results.

As for Mustafa Qureshi’s son, it’s about time that people recognize his talent and start using him for his gift than for his surname. Adnan Shah Tipu also has a minor role in the film along with Beo Zafar who plays Princess Sonu’s relatives and while you can place the latter as a good person, the former was anything but that.

The Jinn – Dwarka Prasad from Delhi

Jawed Sheikh is the surprise package of the film as he gets to play a good-looking Jinn who appears like a devil and makes life hell for Tipu.

No one could have played the role better than the veteran actor who continues to grow stronger with the passage of time.

He had more than a dozen getups throughout the film and in each one of them, he seemed different with the sinister laugh being the constant factor.

He is the reason why the audience stays in the cinema because whenever he appears from nowhere, hell follows. Dwarka Prasad’s character outshines everyone in the film except for maybe Tipu and shows to the filmmakers of today that when casting in a powerful role, the veterans can raise the bar high.

Fasih Bari Khan may have written a film for the first time (not counting Jeewan Hathi) but he has had a vast experience of creating characters that are still alive after a long time.

He has used that very talent for making up interesting characters in 7DMI where you can relate to Kankatta who has one ear bitten and/or cut, or with Tingu Master who is short in height but tall when it comes to ideas.

The pop culture references, the dialogues, the screenplay and the climax prove that Fasih Bari Khan is on top of his game when given a free hand.

Rana Kamran must get an award whenever one is coined for beautifying Karachi on the screen – be it Na Maloom Afraad, Actor In Law or 7DMI,  he has done a tremendous job without disappointing once.

Be it the hotel at Beach Luxury, the top shot over Jahangir Kothari or the roads of the metropolis, he brings a magical touch that seems to wipe off the dirt away.

One must give credit to Beenish Umer for her Art Direction which complimented Rana Kamran’s work as well as that of other technicians.

This is Meenu – Farjad’s third film together after Zinda Bhaag and Jeewan Hathi, however, it comes as a surprise considering they had shown a penchant for black comedy instead of the ‘white’ one.

Teaming up with Fasih Bari Khan, they manage to give a tale that has elements of Cinderella and Bedazzled the latter being the Hollywood classic featuring Elizabeth Hurley as the Devil. They have modernized the story, giving it the Karachi touch and packaging it in a way that you will not be able to resist it.