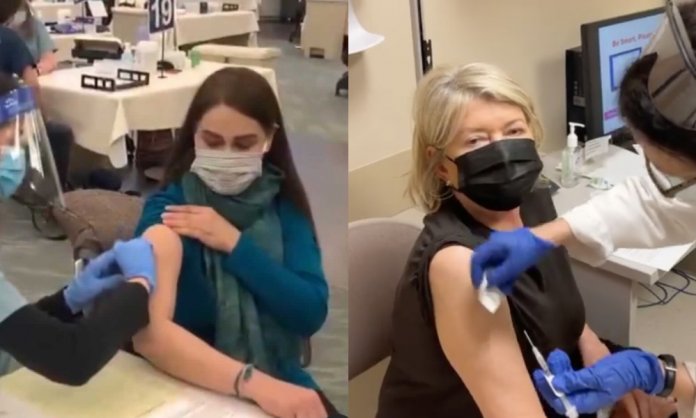 As the COVID-19 virus rolls out, several celebrities have stepped forth to get their immunity in check. Here’s a run-down of all the celebrities who have gotten their first dose of the vaccine!

Our very own veteran actress, Reema Khan has gotten her first dose of the vaccine. As she is based in the United States, she has been able to get the vaccine registered promptly. Reema shared her experience with her fans on social media, gathering the praise of many for her bravery.

Martha Stewart, the legendary Hollywood actress has shared on her social media images of her getting the vaccine. Due to the actress’ age, she is one of the first to be getting the vaccine registered. The most cutest thing has to be her clarifying that she did not “jump the line” and waited with others!

Leith remained one of the judges for the “The Great British Bake Off”. Leith was registered the vaccine a week after the UK began its rollout of the vaccine to the elderly, health care workers, and care home residents. After receiving her first dose of the Pfizer-BioNTech vaccine, Leith described the process as “amazing” and “so efficient.”

Who wouldn’t want immunity from #Covid19 with a painless jab?? #vaccine pic.twitter.com/BP8VTvAF9u

The incredible British actor, who starred in The Lord of the Rings and the X-Men franchises, has received his first pinch of the COVID-19 vaccine.He got his vaccine at the Queen Mary University of London. After completing the process, McKellen, who is 81 years old, said he felt “very lucky” to be one of the first people getting vaccinated.

‘I really hope that, as more people get vaccinated, we will move further along the path back to a more normal way of life.’
⁰Sir @IanMcKellen joins the thousands of people who have now safely received the first dose of the #CovidVaccine. https://t.co/1e3nCAUFcB pic.twitter.com/FFW6jrKqEg

Britain’s Queen Elizabeth, the most celebrated celebrity perhaps, and the Duke of Edinburgh received their COVID-19 vaccinations on Jan. 9, 2021. According to Buckingham Palace, it was administered by a household doctor at Windsor Castle. (We wouldn’t expect anything else!)

Queen Elizabeth II, 94, and the Duke of Edinburgh, 99, have received their Covid-19 vaccinations, a Buckingham Palace spokesperson said. https://t.co/XTswCAuwk0

The Queen, 94, and Prince Philip, 99, are among the 1.5 million people in the UK who have received at least one dose of the vaccine according to BBC. The rounds are being delivered such that those over 80 years old being prioritized.

Judi Dench revealed on January 14th that she has been administered the coronavirus vaccine. The Oscar-winning actress remarked the process as painless and mentioned that within 11 weeks she is to get the booster shot.

5 Smart Ways You Can Shop Without Spending Too Much