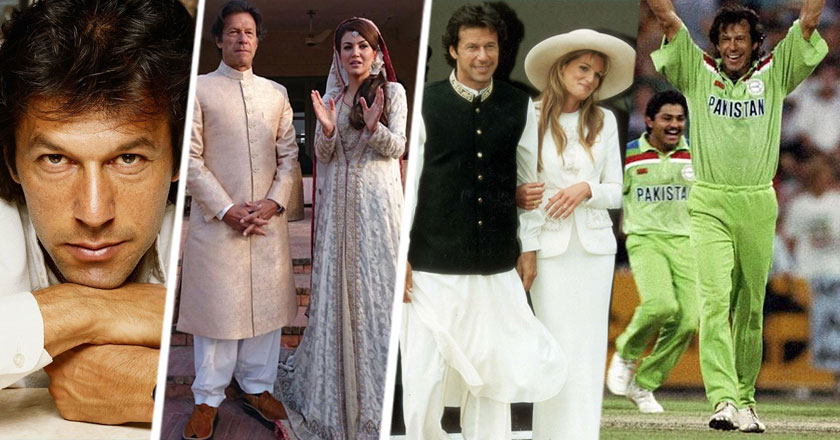 Born in Lahore and educated from Aitchison, Worchester and then Keble College, Oxford, here are 6 memorable moments from the ‘Kaptaan’s’ life that got him all the limelight he needed.

He started to play cricket at the age of 13 for his college, later on, he joined the Worcestershire Cricket Club and made his first debut for Pakistan in 1947 for the Birmingham series at the age of 18. After his graduation from Oxford, he joined the national cricket team in 1976 and played till 1992. Khan remained the captain of the Pakistani team from 1982-92, during his period as a skipper; he led the Men in Green to a glorious win in the 1992 Cricket World Cup. The victory became Pakistan’s first World Cup, and as of now, their only World Cup victory.

By the time he retired, he was a legend and one of the most successful players, securing 3,807 runs while taking 362 Test match wickets. His achievements won him the title of 1 of 8 cricketers to achieve ‘All-rounder’s Triple in Test matches. In 2010, Khan Sahab was inducted into the ICC Cricket Hall of Fame. Celebrity support for Shaukat Khanum has continued throughout the years. Notable Pakistani Actor, Fawad Khan, dedicated his debut Bollywood film titled ‘Khoobsurat’ to the foundation. The Hospital launched an awareness campaign for Breast Cancer Awareness Month (October) in 2015 with the help of singer, Hadiqa Kiani, and film actress, Mahira Khan. Even Princess Diana has visited the hospital in the 90’s.

In May 1995, Imran Khan married Jemima Marcelle Goldsmith, later known to be Jemima Khan, in a two-minute ceremony in Paris. The two tied the knot once again a month later in June in a civil ceremony in England.

During their marriage, the couple had two boys, Sulaiman Isa and Kasim. However, the marriage came to an end 9-years later in 2004. In January 2015, Khan remarried to Reham Khan in a private nikkah ceremony, however, this too could not last long and the couple filed for divorce in October. Imran Khan has been rumored to be a women-magnet back in his days. Rumors of Khan being in a secret relationship with Bollywood’s Zeenat Aman started to spread like wild fire in the 70s-80s while he was on tours to India. At times, his friends would bring up the affair when he seemed fatigued the next day during the match to pull his leg. The philanthropist was also rumored to be in a secret relationship with Sita White before his marriage to Jemima- their relationship came to an end with a genetic determination of paternity.

Khan is rumored to have a child with Sita White, named Tyrian Khan. The relationship between Khan Sahab and Tyrian has also been hidden in the clouds, for a very long time- Khan denied her to be his blood, whereas the genetic determination petition filed by her mother claims that she is his daughter. Imran has always been a father-like figure for her since she was born, even after denials. Tryian is also close to his ex-wife Jemima Khan, and her two sons, who are her step-brothers. Last year, she spent her 23rd birthday with the Khans, according to a British newspaper. We do not know how much of this is true, though!

Pakistan Tehrek-e-Insaf (Pakistan Movement for Justice) is a political party based in Pakista; it was founded in 1996 by former national Pakistan national cricket captain, Imran Khan. The Third Way Centrist party has the vision to create a welfare state through which it will be responsible for the employment of citizens, health, and provision of education to every man, woman, and child.

Though the party had been existent for some time, it gained hype in 2013 when it received over 7.5 million votes, making it one of the biggest and strongest parties in Pakistan.