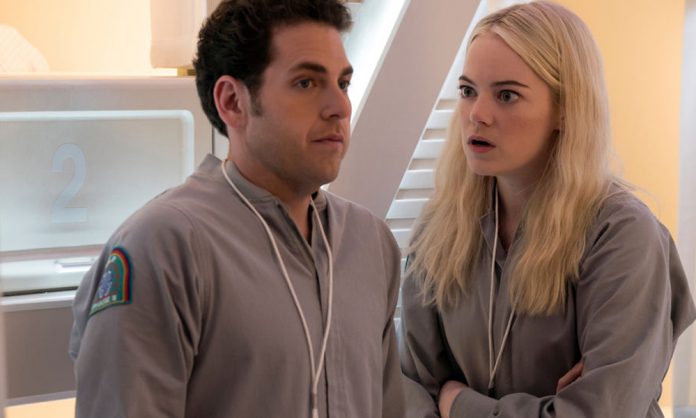 As the summer draws to a close, we have a clearer picture of what will be showing on the small screen this fall. Jonah Hill opposite Emma Stone, the latest Amazon Prime Video comedy, Sean Penn in a science-fiction saga, the reboot of “Magnum” and the next ABC comedy-drama: here’s a list of five new releases that will help ease the pain of post-vacation blues.

The streaming giant has called on bankable Hollywood stars Emma Stone and Jonah Hill for this science-fiction saga. Directed by Cary Joji Fukunaga, the story follows a clinical trial conducted on a diverse group of mentally disturbed patients. Among them are Annie Landsberg and Owen Milgrim, who are ready to risk anything to fight their demons with a new miracle remedy. Not surprisingly, the experiment doesn’t quite work out as planned. The first season will comprise ten episodes.

From September 21 on Netflix.

Amazon Prime Video presents an original and insightful dark comedy focusing on the tribulations of marriage, romantic relationships, and commitment in general. In a script penned by Alan Yang (“Master of None” and “Parks and Recreation”) and Matt Hubbard (“30 Rock” and “Parks and Recreation”), “Forever” recounts the peaceful and rather predictable life of June (Maya Rudolph) and Oscar (Fred Armisen). In a bid to escape from their hundrum routine in a Californian suburb, they set out on a ski vacation that takes them into very unfamiliar territory. The first season will comprise eight episodes.

From September 14 on Amazon Prime Video.

The network that brought us “The Handmaid’s Tale” is back with another story from the future. In the role of astronaut Tom Hagerty, Sean Penn leads a near-future expedition to Mars. The science-fiction drama will explore the relationships of those left behind on Earth and the team en route to the red planet. “House of Cards” creator Beau Willimon took on the script for this original series, which features Natasha McElhone (“Californication”), James Ransone (“The Wire”) and Lusagay Hamilton (“House of Cards”).

From September 14 on Hulu.

American television’s best-known private detective returns to CBS in a reboot of the 1980s show. Jay Hernandez plays a rejuvenated Thomas Magnum. Though Hernandez appears without the legendary moustache, an appearance at some point by the original Magnum, Tom Selleck, has not been ruled out yet. After a tour of duty in Afghanistan, Magnum starts out as a private investigator with help from his friends, Juliet Higgins (Perdita Weeks), Theodore ‘TC’ Calvin (Stephen Hill) and Orville ‘Rick’ Wright (Zachary Knighton).

From September 24 on CBS.

ABC’s new show, “A Million Little Things,” tells the tale of a group of friends faced with innumerable questions following the suicide of one of their number. In creating the drama series, D.J. Nash drew on his own personal experience of a death in similar circumstances. The comedy drama features Ron Livingston, Romany Malco, James Roday, Christina Moses, Christina Ochoa, Stephanie Szostack, Grace, Park and Allison Mille.

From September 26 on ABC.