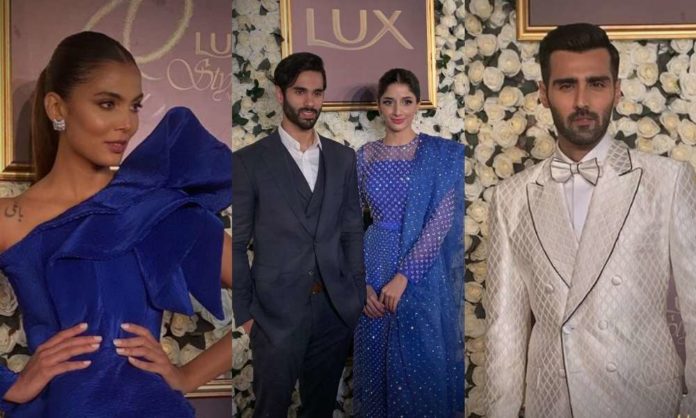 The hosts for the evening included Mehwish Hayat and Ahsan Khan and the duo of Ahmed Ali Butt and Mansha Pasha. Every bit of the showflow, was designed around the #LSA4Pakistan and focussed on building up and appreciating the Pakistan fashion and entertainment industries. The LSAs are much acclaimed for recognising both the high achievers and encouraging new emerging talent and in its 20th year the show stayed true to its ethos of recognising Pakistan’s varied talent.

The day-long red carpet was magnificent as for the first time it included a live catwalk that was a perfect spot to showcase the many varied fashion hits that strolled down. Hosts Dino and Ayesha Omar plus a plethora of channels, electronic and digital were seen in action as celebrities walked down in momentous outfits. While some rushed towards the show, Asim Azhar shared his first LSA experience and music nominees; Bayaan, Baluch Twins, and Abbas Ali Khan sang snippets of tracks during interviews. The TRESquad featuring Hareem Farooq, Nimra Jacob, Maha Tahirani, and Sarah Zulfiqar made an appearance at the LSA red carpet together while Ali Rehman, Uzair Jaswal, Shahbaz Shigri, and Imran Ashraf entertained the media with their antics. The excitement and bonhomie of the 20th LUX Style Awards was evident to all.

The night began with the national anthem sung by music veteran, Shehzad Roy. Starting off the show, Amir Paracha, CEO, and Chairman of Unilever Pakistan took over the stage to welcome the audience to the milestone 20th year of glitz and glam.

Amir Paracha said, “Lux Style Awards began as a means to spread the message of Lux to the audience via fashion, music, tv, and film but it has become so much more. It has encouraged entertainers to persevere with their talent and continue to bring joy to their fans. The real meaning of the LSAs is the hope that comes with it and how it has battled during tough times, like natural disasters, political instability, or a pandemic. The LSAs have gone on without breaking momentum, transforming from a LUX platform to Pakistan’s platform internationally. Our hashtag this is year is LSA4Pakistan.”

With that, the show opened with a star-studded LSA anthem “Sitare, sitare, aasmaan kay tarey, keh raha hai yeh pal, aaj hum hain yahan” which featured a lineup of celebrities. The anthem was composed by Bilal Maqsood and sung by Aima Baig, Uzair Jaswal, Asim Azhar, and the Young Stunners. Many celebrities joined the stage such as Mahira Khan, Meera Jee, Ayesha Omar, and couturier Ali Xeeshan and show choreographer Frieha Altaf.  Following this, Ahmed Ali Butt, who has continuously entertained audiences with his quick wit and humour, and Mansha Pasha, the versatile actress, hosted the music segment. The segment included Awards given to the Best Singer of the Year, the Best Song of the Year, Best Emerging Talent, and Best Music Video Director. It started with music dynamo Bilal Maqsood and Mira Sethi, wearing Hussain Rehar, presenting the Best Emerging Talent in Music award, won by Aziz Kazi for Shantarum, a meditational track. Friends, Asim Azhar and Uzair Jaswal presented the award of Best Video Director, won by Hamza Bin Tahir for Teri Tasveer by Bayaan. Recently engaged Aima Baig and Shahbaz Shigri graced the stage to present song of the year and singer of the year. CEO of Airsial, Ameem Hasan joined them on stage to present the latter.

The Unilever Chairman’s Lifetime Achievement Award was dedicated to Farida Khanum, known as the Queen of Ghazal during her active years. Famously known for her songs, Aaj Jaane Ki Zidd Na Karo and Woh Ishq Jo Humse Rooth Gaya, Farida Khanum has been a singer with an inner muse who expressed her identity in every song. A dedication of love to her was performed by Mehwish Hayat and Resham to the melodious Punjabi numbers of “Balle Balle”  and “Meinay Pairoon Mein Payal Tau Bandhi Nahin”. Both Mehwish and Resham gave the legendary singer a heartfelt tribute through their energetic yet elegant dances, and Unilever Chairman and CEO Amir Paracha read out a befitting tribute, standing beside the lovely Mahira Khan on stage. Farida Khanum’s message as she accepted the award was then played out. Ending the segment was the fabulous Tabish Hashmi, a spectacular comedian who has recently rightfully earned fame. Tabish walked down to the audience and roasted some of the nominees, creating moments of laughter.

The second segment of the show starred the Laal Kabootar star Mansha Pasha and the brilliant Mehwish Hayat together. The ladies asked Asima Haq, Director of Beauty and Personal Care at Unilever Pakistan to introduce the LSA’s newly initiated LUX Change Makers Award. Asima Haq said, “This award has been created to recognize the changemakers in the industry. As a brand Lux has always endorsed a positive attitude towards everything feminine and this award recognizes the female strength of women in the industry that has created change in the world with their art and content.” She then announced the award posthumously for the late Haseena Moin, playwright par excellence, as the first recipient of the award. The iconic Haseena Moin wrote memorable female characters. A tribute to her played out, which featured celebrities like Behroze Sabzwari and Marina Khan who spoke about Haseena Moin’s larger-than-life energy and how she created dreams. She was a woman who knew her worth and wanted to showcase women who carried the same attitude, leading to characters like Dhoop Kinaray’s Dr. Zoya. Her award was accepted by her niece Sadaf, who spoke of how her aunt, her father’s sister, inspired so many to live out their lives with courage and independence.

To present the Lifetime Achievement Award in Fashion, Safinaz Muneer Co-founder of Sana Safinaz, and Shamoon Sultan, founder of Khaadi were given the honour to award legendary Banto Kazmi. Banto has been an inspiration for many younger than her in the industry, as well as to the girls whose lives she has added much joy into, by bringing colour to their bridal dresses and weddings.

Debonair, male model, Hasnain Lehri, and chic female model, Mushk Kaleem came on stage to start off the awards in the fashion category; best emerging talent and best hair and makeup artist. The best emerging talent in fashion was bagged by a promising model, Sarah Zulfiqar. Salman Ahmed, musician, famously known for band Junoon, and actress, Azekah Daniyel continued the segment and went on to award best fashion photographer and achievement in fashion-pret. Achievement in fashion pret was won again by Generation who wanted to thank their customers, adding that every time somebody wears a generation outfit, they add a sentence to their colourful story.

Ahsan Khan, the host for the second bit of the fashion segment, joined Mehwish Hayat and invited two former LSA winners models Nadia Hussain and Fouzia Aman, who presented the Best Menswear Designer award, won by Ismail Farid. The gorgeous Sunita Marshall and high-end designer, HSY announced Model of the Year, female. This award was won by Mushk Kaleem, who was dressed in an extravagant stand-out hot pink gown. Ayesha Omar and Azfar Rehman were welcomed onto the stage to award the Model of the Year, Male award. Ayesha Omar looked stunning in an all-gold, gemmed body-hugging dress. Achievement in fashion-luxury and bridal were announced by Emaad Irfani and Saboor Ali. Tabish Hashmi roasted some of the fashion category nominees and the breaks of entertainment were appreciated.

A heart-tugging performance by Asim Azhar in the middle of the awards made the audience emotional as he sang “Nimmi Nimmi” an original by the late Farhad Humayun, the Overload vocalist who was remembered for leaving this world too soon. An obituary video played behind Asim as he sang, featuring industry stalwarts who were no more. Tweets by celebrity friends were also shared on screen.

Television’s biggest night was swept by the two Hum TV serials Ehd e Wafa and Pyaar Kay Sadqay with Ehd e Wafa walking away with Best TV Serial and Yamna Zaidi sweeping the Best Actress Awards for Critics and Viewer’s Choice categories. For the men, it was Bilal Abbas for Pyar Kay Sadqay and Danish Taimoor for Geo’s Deewangi.

The grand finale featured a plethora of power-packed performances by the Parey Hut Love stars Mahira Khan, Meera and Sheheryar Munnawar for the perfect finale. Director Asim Raza and Producer Fizza Ali Meerza talked about how 2020 ruined the film industry by shutting down cinemas and halting projects. While no films were made, the desire to make films lives on, and as everybody knows music and film go hand in hand. Mahira Khan, Sheheryar Munawar, Ahmed Ali Butt, and Meera jee, performed on the lively songs that stayed popular all year round and were played multiple times at weddings: Haye Dil Bechara, Ik Pal, and Morey Saiyaan. Each performance looked spectacular because of the graphics behind and the magic created by Nomi Ansari, with every performer’s outfit stitched with intricate detail to be noticeable on stage.

This year’s LSAs were partnered by Sialkot-run state of the art airline, AirSial, as the travel partner, Tresemme, as hair partner, Magnum, and Lipton, as snack and beverage partners. The backstage was buzzing with the help of booths put up by sponsors. Celebrities prepped backstage by the Tresemme booths as Tresemme announced two best tressed (dressed) awards for celebrities who exhibited trend and style backstage. Nimra Jacob and Ali Rehman won these titles along with iPhone 12s.

The 20th LUX Style Award was conceived and directed by Frieha Altaf at Catwalk, with show dancing choreography by Nigah, Show Script by Nabeel and Fizza and Ahmed Ali Butt, TV Production by Nadeem J, Hair, and Makeup by Nabila & NGents, Event design by Jalal Salahuddin, official Photography by Faisal Farooqui at Dragonfly and Performance Costumes by Nomi Ansari, with Show styling by Mavi and Rao; Geo TV as media partner, Team Reactivate for all content for Lux’s own handles, Team A F Fergusons as Awards Auditors and Team Talking Point for Awards Management and Digital and Print Media.

Ayesha Omar – Looking like a glass of champagne, Ayesha Omar adorned a Dubai based designer, Labour Joise’s gown while her second outfit, also a stunner, was a black dress by Hussain Rehar

Dur-e-Fishan- In a satin silk, deep purple dress by Elan

10 things that we loved at the 20th LUX Style Awards