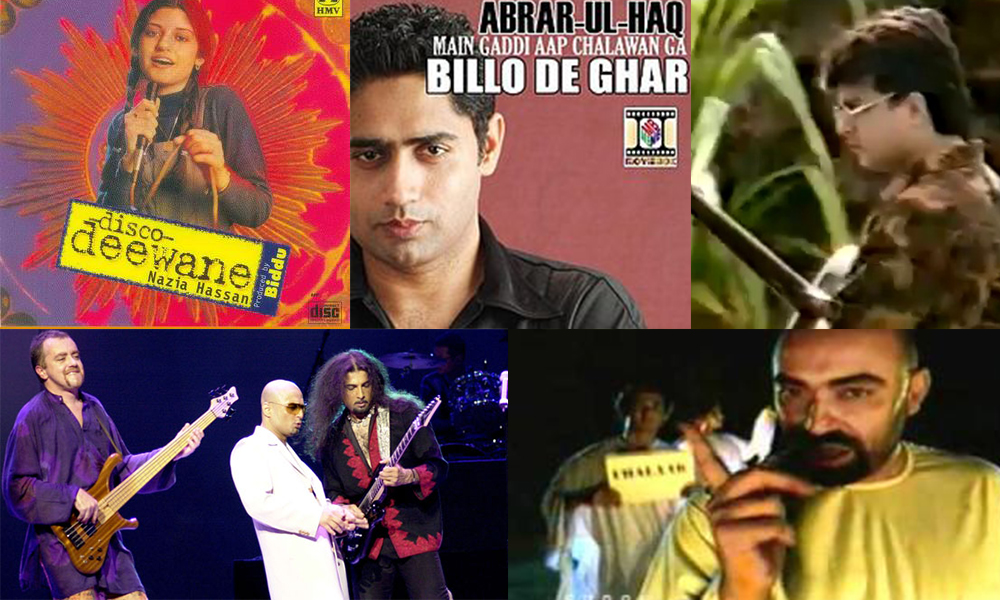 The Pakistani music scene has changed over time, with newer genres and artists are emerging for the millennials. In the ’80s and ’90s, a cultural wave stormed through the land and led to the birth of energetic musical fusion of East and West.

This was the age of rebellion where the underground music scene flared and came the arrival of new artists into the scene. Singers such as Vital Signs, Junoon, Nazia Hassan, to name a few, were the crème de la crème of the industry.

However, these old songs will never be forgotten, considering the impact they have had and will continue to have on the masses. The term ‘out with the old and in with the new’ couldn’t be more wrong as it’s clear to see that these songs will honestly always be on our playlists.

Let’s take a quick throwback to the times when walkmans and cassettes were all the rage in Pakistan, keeping us hooked to the stellar top hits from the 80s and 90s!

Check out all the golden musical memories here!

The late Nazia Hassan, also known as the ‘Queen of Disco Pop,’ managed to sell 60 million records worldwide. Working alongside her brother, Zoheb Hassan, they produced mega-hits, including their first album, that was declared the best selling album in Asia at the time. That album included this song, Disco Deewane, which was released in 1981 and is still widely popular to this day.

This song was the first biggest hit by the Sufi rock band, Junoon. Releasing in 1996, this song became the anthem of the 1996 Cricket World Cup and is also the national song of Pakistan. Even now, this melody continues to be played at many Pakistan cricket matches.

Released in 1987, Dil Dil Pakistan broke records upon its release. It ranks on the third spot in the BBC World Service International poll of popular songs in 2003. Because of the patriotic message behind this widely popular tune, it is unofficially the national anthem of Pakistan. Vital Signs is considered one of the most successful bands of Pakistan and featured the famous, Junaid Jamshed.

Brother to the famous Nazia Hassan and part of the ‘Nazia and Zoheb’ duo, Zoheb Hassan produced many hits in the 80s. He released this 1984 solo in the album, ‘Young Tarang.’ He recently renewed this track for Coke Studio, bringing back his chilling vocals and one-of-a-kind aesthetic to a newer generation.

One of the original and highly reputable artists in the pop scene, Alamgir released this song in the 80s, and it quickly gained recognition. The ‘Elvis of the East’ continues to wow the world with his immense talent and even has an upcoming biopic film that will be released in his honor, starring the talented Fawad Khan.

One of Ali Haider’s most notably popular songs is ‘Purani Jeans’ from his 1993 album, ‘Sandesa.’ He has released several albums throughout his career, but this catchy song seems to be the one that transports you right back to the earlier 90s.

This song is featured in Abrar ul Haq’s debut album of the same name and quickly became the best selling album of its time, back in 1995. The Urdu-Punjabi classic has sold over 16 million copies to date.

Hadiqa’s Dupatta from her album, ‘Roshni’ was a chartbuster, and further certified the ‘Platinum’ is received. The techno beats of this song assured Hadiqa’s place as the country’s leading female vocalist. This funky song’s success leads it to be listed at number 15 on ‘Twenty Best Pop Songs Ever for Pakistan’ at the time.

The biggest hit from the band, ‘Awaz,’ was ‘Mr. Fraudiay’. It featured on their third and final album, ‘Shola,’ which made its debut in 1996. It took a more Western approach rather than the Eastern one their previous albums had taken. Nonetheless, this song took the cake, exceeding many people’s expectations. It will be a forever memorable tune as the band parted ways not soon after its release.

20 Signs You were Born in 90s in Pakistan