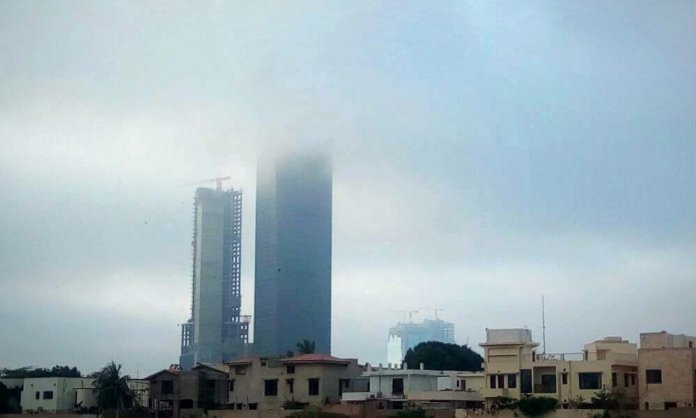 However, the sand storm has intensified even more on Monday, while Pakistan Metrological Department (PMD) has predicted rainfall along with thunderstorm in the metropolis.

The storm is a result of a low-pressure system and dropped the temperatures, providing citizens with some relief from the blazing heat.

It has caused visibility to be reduced from 6 to 2 km, affecting flight operations.

Another spell of strong dust storm hits #Karachi, aerial visuals recorded at 10:15am this morning pic.twitter.com/qxoKSYXBC4

However, the storm has disrupted power-supply, uprooted trees, and disabled signboards, electric wires across the town.

Several trees uprooted across the city due to #KarachiDustStorm pic.twitter.com/CufsnTGpJ2

Casualties are feared as various accidents are also being reported owing to the strong winds.

#KarachiDustStorm: 5 female students injured as roof of their class collapsed in Tipu Sultan area
one man dead as tree fell on him near People's Chowrangi

Traffic disruption in Clifton as electric pole fell down, hitting a car#Karachi, due to dust stor pic.twitter.com/qRMgyJ9um3

Karachi is expected to receive showers on Monday and Tuesday, according to the Meteorological Department.

Drivers are requested to be cautious due to low visibility during high winds and dust.